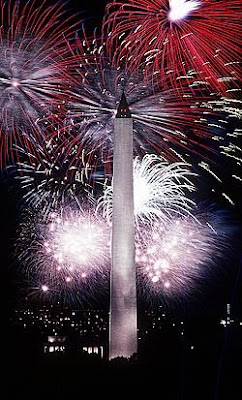 Wikipedia's July 4th description: In the United States, Independence Day, commonly known as the Fourth of July, is a federal holiday commemorating the adoption of the Declaration of Independence on July 4, 1776, declaring independence from the Kingdom of Great Britain. John Adams wrote to his wife Abigail:
“The second day of July, 1776, will be the most memorable epoch in the history of America. I am apt to believe that it will be celebrated by succeeding generations as the great anniversary festival. It ought to be commemorated as the day of deliverance, by solemn acts of devotion to God Almighty. It ought to be solemnized with pomp and parade, with shows, games, sports, guns, bells, bonfires, and illuminations, from one end of this continent to the other, from this time forward forever more."

Adams' prediction was off by two days. From the outset, Americans celebrated independence on July 4, the date shown on the much-publicized Declaration of Independence, rather than on July 2, the date the resolution of independence was approved in a closed session of Congress.

This sentence has been called "one of the best-known sentences in the English language and the most potent and consequential words in American history. The passage has often been used to promote the rights of marginalized groups, and came to represent for many people a moral standard for which the United States should strive. This view was greatly influenced by Abraham Lincoln, who considered the Declaration to be the foundation of his political philosophy. (Remember, he freed the slaves.)

So what does all this have to do with DIERKS BENTLEY? Well for starters, Dierks is very patriotic. His dad served in WWII and Dierks has always been a huge supporter of our American Troops, and often dedicates Long Trip Alone and My Last Name as a thank you to them in his live shows.

And he sings about freedom - Free and Easy (Down The Road I Go); and he "Sings For Free" (another song performed a few times live but never released on an album); his friend Jordan is breathing free and easy in heaven now; and Dierks is singing free of charge on the Fourth of July at a live show at Ft. Hood for the troops and the American public in Killeen, Texas!

But what really linked Independence Day to Mr. Bentley for me was when I read the phrase above: "a moral standard for which the United States should strive." My first thought was, that's how I think of Dierks--a moral standard for which we all should strive. His caring nature and "do the right thing" attitude sets him apart from other artists. He lives life (Can't Live It Down), and he pursues happiness. He treats all his fans, friends and family with equality and respect. And that is the self-evident truth!

Dierks performed at the Capitol in Washington DC two years ago. Please enjoy his performance from July 4, 2007 of Free And Easy:

Have a safe holiday!


"We hold these truths to be self-evident, that all men are created equal, that they are endowed by their Creator with certain unalienable Rights, that among these are Life, Liberty and the pursuit of Happiness."

Email ThisBlogThis!Share to TwitterShare to FacebookShare to Pinterest
Labels: Dierks Bentley, Free And Easy Down The Road I Go, Independence Day, The Capitol in DC