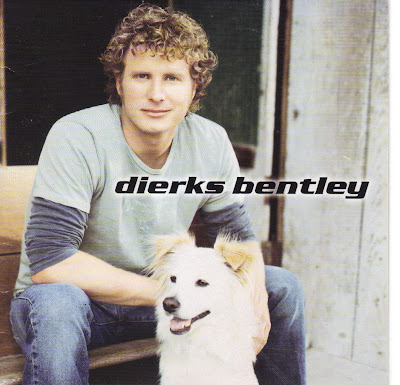 One of Craig Shelburne's old favorite's is Dierks Bentley's self-titled CD released in 2003. Read how 'unmistakably country' he thinks the whole album is on his CMT Blog:

With so few new albums to listen to, I’ve been digging through my own collection of old favorites. Today I grabbed Dierks Bentley’s self-titled album, released in 2003. (I can’t believe it’s been that long.) Some of my friends used to go see him play at the honky-tonks on Lower Broadway but I had never heard his music until “What Was I Thinkin’.” Cool song, especially that twangy intro. Very distinctive. But today I’m a little bit surprised by how unmistakably country the whole album is. I guess I took it for granted back then, since he had immersed himself in country music history before he landed a record deal. Although I admire his writing on “Bartenders, Etc.” and “Distant Shore,” one song I never get tired of is Buddy and Julie Miller’s “My Love Will Follow You” — whether it’s Dierks’ version or Buddy’s. And I’m tickled to rediscover “Whiskey Tears,” which is about as traditional as you can get. Next time he slips a demo CD to George Strait, he ought to put this one on there, too.
I left Craig a comment on the blog. Basically, he left out my favorite and the one that even Dierks 'wished' had been a single--Wish It Would Break. I know in my heart that would have been a #1 hit! There's still time, Dierks! Keith did it with "You Look Good In My Shirt", and Brad did it with "Waitin' On A Woman." You can re-record WIWB for your next album and release it as a single! DB Congress would surely push it to #1 for you! What do you say?

*Special thanks to Meg, DBC rep in FL, for submitting the link to this CMT blog.
Posted by DB Congress at 8:13 AM