DBC MEMBER OF THE WEEK - Katsnhouston(Linda)

Linda just joined the Congress from Houston, Tx. She has been a fan ever since "What Was I Thinkin'" came out in 2003. When Dierks is in her area, Linda carries her very own "Fake Jake" to the show! Here is Linda's story on how she got a "Fake Jake!":

"In 2003, I met Dierks in Spring Texas - he was promoting his debut album. At the time we discussed a conversation that he had with a lady bank employee regarding an overdraft at his bank while awaiting the release of "What Was I Thinkin'"". I conveyed to Dierks at the time not to worry, that he was going to do just fine, and he would make it, no doubt. Well, Dierks has MORE than arrived!! I have been raised around country music, with my deceased brother being a singer, songwriter, and published artist. I know talent when I see and hear it, and that day I saw it. Before I even walked in my front door after meeting Dierks, I received a call saying that I had won the drawing for the autographed cut-out of Jake. That helped push me over the edge, and I have been a loyal ever since." 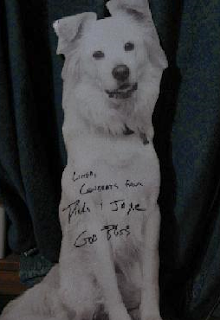 Linda's favorite album is Dierks' self titled album and her favorite song is "How Am I Doin'".

Thanks for joining us Linda!

Here are other members who have recently joined us making our total to be 510:
newb from Georgia
FFAGrlLvsDierks from California
dierksgirll from North Carolina
CHILLFACTOR867 from Minnesota
Stormer23 from Iowa
Congressman-Bud and MOM-NOS from New Hampshire

Thanks to all of you as well!