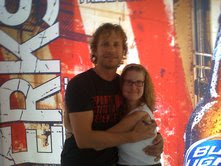 Shauna is a DBC rep in Michigan so when she found out Dierks was scheduled to perform a show in her home state she was excited. And even more so when she found out she won a Meet & Greet through the fan club. It had been several years since she first met him and she was not sure if he would remember her. During her M&G, Shauna also met fellow Michigan DBC rep, Tracie.

"Tracie and I met. I was asking if she is on the board and I said my name. She is so sweet. Dierks remembered me when I said my name. We talked for a few seconds and got our picture taken. It was the best meet and greet ever. It was better than the first time. As Dierks and I were talking, we kept hugging. He called me a sweetie and asked how I have been. I told him I could not wait to see him perform. He pinched my arm, and later, he grabbed my hand during his set."
Posted by DB Congress at 2:38 PM