Radney Foster and The Confessions will release a new album, "Revival" on September 1, with a 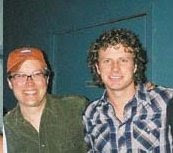 guest appearance by Dierks Bentley (who recorded Foster's "Sweet and Wild"). Dierks joins Radney on "Until It's Gone," the third cut on the CD.

Radney Foster's Revival emerged when the Texas native plunged into the roiling waters of change--his father's death and the end of his twelve-year, 5,000-mile separation from his son--and came up with renewed conviction.

Most of the songs on the album are what Foster calls "close to the bone," so personal that he either wrote them on his own or with trusted friends, like Darrell Brown and Jay Clementi (Sweet and Wild). "I Know You Can Hear Me," is a wrenching goodbye to Foster's father. "I Made Peace With God That Day" and "Until It's Gone"--both written with Brown--respectively capture the anguished fear of losing a child and vow to live with abandon (and crank up the volume) from here on out.

For his 50th birthday celebration, Radney is throwing two parties--one in Austin and the other in Nashville.

Dierks Bentley will be among the guests at the Nashville, TN party, to be held at the Exit/In on July 20th. You can celebrate with Radney, Dierks and other guests such as Darius Rucker, Randy Rogers, Marc Broussard, Bill Lloyd, Lee Roy Parnell, George Ducas and other surprise guests. It's sure to be a night to remember, and only limited tickets will be sold. Get 'em on the Exit/In website here.

Revival is available NOW for pre-orders and comes autographed.
Posted by DB Congress at 11:31 AM