KEITH, DIERKS TAKE IT TO THE LIMIT 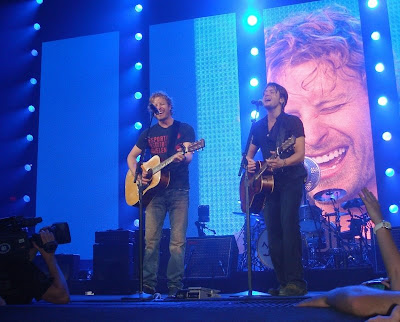 The following was posted on Keith Urban's website in "From The Road Blog."

Take It To The Limit - Keith with Jason and Dierks

When Keith asked both Dierks Bentley and Jason Aldean to join him on stage for the 1975 Eagles hit "Take It To The Limit" at two separate recent tour dates in VA and KS, both singers had to think on their toes and secretly devised "cheat sheets" to help them with the song that neither had previously performed live.

Dierks scribbled out the lyrics on his forearm with a Sharpie, and Jason followed a few weeks later by taping the printed lyric sheet to his mic stand with gaffe tape. Once he realized what both acts were doing, Keith didn't let either get away without a little public humiliation in front of both sold out crowds. Thankfully, the fans were more than happy to come to both Dierks and Jason's rescue, creating an arena-wide sing-a-long.

Enjoy the video clips here!
Posted by DB Congress at 7:04 AM

Email ThisBlogThis!Share to TwitterShare to FacebookShare to Pinterest
Labels: Dierks Bentley, Jason Aldean, Keith Urban, Take It To The Limit, The Eagles