Feature TLB member of the week...

Robbie Harrington, better known as the bass guitarist for Dierks Bentley, is typically a straight-faced player, who rarely smiles. I have taken hundreds of photos at dozens of live concerts in the last few years--mostly of Dierks, but if I am positioned on Robbie's side of the stage, I try to catch Robbie having a good time. I have witnessed a slight sparkle in the eye, maybe a wink, an occaisional hop--but rarely a smile! 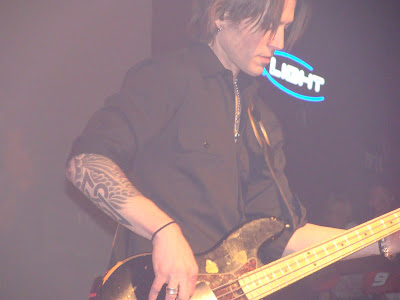 Referred to as a "flexible power player" by bassplayer.com freelance writer Jimmy Leslie, Robbie Harrington hails from Las Vegas (Los Angeles?) and moved to Nashville about ten years ago. With a background in heavy rock, he toured five years with pop country artist Keith Urban before totally transitioning to contemporary/traditional country with Dierks Bentley. When asked how he approached the change he said, "You have to listen carefully to the vocal—to the story—for what can seem like random added or missing beats in order to suit the lyrical cadence. Learning that has helped me work with Dierks."

Harrington can be heard playing Space Bass on Life On The Run, from Dierks' Feel That Fire CD. He also lends his vocals during the live performance of this rocker-feel song. I love the part where Dierks sings, "Here they come now, gotta lay low", then Robbie chimes in "low, low, low, low." Although the liner note lyrics say "whoa, whoa, whoa, whoa." Another bass credit goes to Robbie for Better Believer, also on Feel That Fire.

But the biggest feather in his cap comes from the previous DB studio album, Long Trip Alone. Robbie tells Jimmy Leslie last year how a mistake helped him co-write (with Rod Janzen) the opening riff for Free And Easy (Down The Road I Go), which landed at #1 on the Billboard Country chart in 2008.

How does your gear inform your tone and your playing?
"I use a gigantic rig to get a huge sound, and I simultaneously run a guitar amp for distortion. I’m a total gear nerd. Oddly enough, I was helping fix the guitar player’s amp when we ended up co-writing the opening riff for the current single, “Free and Easy.” My biggest hope right now is for that song to take off, because this is the coolest gig I’ve ever had." (I think your hope came true--big time, Robbie!)

Recently, Robbie was caught between songs having a good time in Mahnomen, MN April 24, 2009 (photo credit MonaP). I think it has something to do with the fact that he is now closer to the front of stage and actually singing backup vocals during the live show.

Robbie the Robot, Guitar Gear Nerd or Rocker-Dude turned country boy? Time to vote! Leave a comment with your thoughts! Hey Robbie--ya there? You can vote on yourself, too! 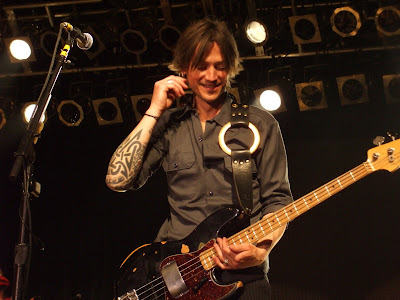