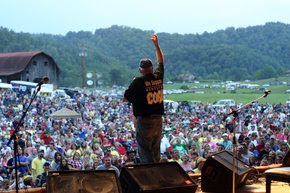 According to our friends at CMTT, Halfway To Hazard raised over $200,000 for the Buckhorn Children Center and Family Services, during their Charity concert/trail ride in Crockettsville, KY, August 22. Among other artists, our DB Congress president, Dierks Bentley, generously gave up his Saturday night to perform for nearly 25,000 country music fans in attendance in support of this worthy cause.

Halfway to Hazard’s Chad Warrix says, “We were hoping to just double last year’s attendance of 7,500 and raise more than the $110,000. The fact we more than tripled attendance and doubled money raised this year is staggering! We applaud all the volunteers and artists for helping us in accomplishing and surpassing our goals.”

Last year Lt. Governor Mongiardo honored Warrix and David Tolliver by appointing them Kentucky Colonels, an honorary title bestowed upon nominees for their service and contributions to the community as the inaugural event drew over 7,500 people and raised over $110,000 for Buckhorn Children's Center. This year, Mongiardo announced Kentucky Governor Steve Beshear named August 22 and 23, 2009 as "Halfway to Hazard Days." He also honored Tim McGraw, Dierks Bentley, and GAC's Storme Warren as Kentucky Colonels for their support of the event.

After the trailride, the fields were flooded with fans to watch Tim McGraw, Dierks Bentley, Danielle Peck, Keith Anderson, Lee Brice, and Halfway to Hazard perform. Country Girl will be talking with the [H2H] guys later this week to discuss the secret to their successful fundraiser.
http://www.wkyt.com/wymtnews/headlines/54619187.html
WKYT said, "The music did not end until early Sunday morning after hours of entertainment from some of country's biggest and rising stars. We were given backstage access and talked to many of them. Bluegrass bands entertained the crowd as it continued to get larger Saturday afternoon. People came from as far away as Canada to hear people like superstar Tim McGraw, who flew in on a helicopter and was the first to perform during the evening concert.
McGraw says he's a big supporter of Halfway to Hazard. “The Halfway to Hazard boys, good friends of mine, known them for a long time, big fans of those guys, glad to help,” McGraw said.
Other stars were impressed by the venue and happy to support a good cause.

“Kind of a natural amphitheater thing, it's really cool! We're excited to be here and help out anyway we can 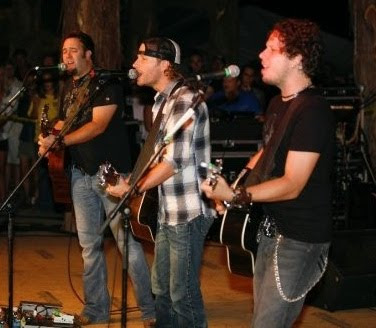 “I've known David and Chad for so long, they've been buddies we've been writing songs and playing all over Nashville before either one of us have record deals, so it feels good to do something with those guys, it's for such a great cause so it's good to be here,” Keith Anderson said."
Dori Hjalmarson at the herald-leader.com website posted an interesting photo and an article that caught my attention, of a fan who drove 1400 miles to attend the event. Her name struck a chord in my memory--I think she's also a DB Congress member in addition to a H2H fan!

Sarah Goddard, center, takes pictures of the ATV parade through Buckhorn, Ky., on Sunday, Aug. 23, 2009. Goddard, a member of the unofficial Halfway to Hazard fan club, the Daisies, drove 1,400 miles to attend The Halfway to Hazard Charity Trail Ride and concert. 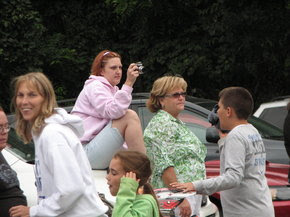 Hey Sarah! Ya there? If that's you, please post a comment and let us know!
Posted by DB Congress at 8:55 PM