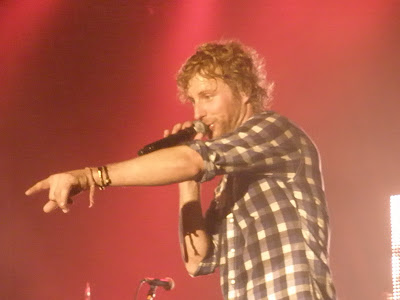 In preparation for the show tomorrow night, Cleveland.com published a glowing feature article about Dierks Bentley, authored by Chuck Yarborough. I was really impressed by many of his literary rhetorics used to describe D's lyrical genius. Like this one:

But the atypical, unconventional, "distinctly different'' songs like "Beautiful World,'' "Pray'' and "Last Call'' could be grouped together in a subset called "The Evolution of Dierks Bentley.'' Part of that is his ever-increasing maturation as a songwriter, musician and singer. The other part, and perhaps the most impressive part, is his ability to soak up and meld his own talent with a "distinctly different'' cadre of co-writers.

And then when Dierks said the only way Beautiful World could be better is if Patty sang the whole thing, Mr. Yarborough responded adamantly:

DB: "That's a highlight of the record for me (Beautiful World),'' Bentley said. "Hopefully we'll get that song out there to country radio as the fourth single, right after 'I Wanna Make You Close Your Eyes,' '' he said. "She's (Patty Griffin) iconic for so many people,'' Bentley said. "I really got into her music through Cassidy, my wife, who is a huge Patty Griffin fan. Once I got on it, I was majorly hooked and wanted to get her on the record. It's a good song to begin with. The only way it could be better is if she sang the whole thing,'' he said, laughing.

CY: Not so. Their voices are each "distinctly different,'' but they mesh in a way that makes that "good song'' a great song. Few who hear it will be able to avoid being "majorly hooked.''

And my favorite Dierks quote:

"I walk on the stage dry and walk off soaking wet,'' he said. "I go for more of trying to get an emotional response rather than just applause, and try to break down that fourth wall and get people really engaged.''

But that's when Yarborough goes haywire.

"Why? Because his goal is "to not make it me or them, just us together.'' So in the end, it's all of us, not just that little white tee shirt, sittin' right there in the middle by him."

What? Dude, it's "Little White TANK TOP!" But thanks for a great story!
Posted by DB Congress at 8:01 PM