I've been telling Janet (Wildcat), DB Congress rep in New Jersey that I'd blog her Dierks wall story for two months, so here it is! But now it's not just a DB collage on her wall at work, but a new and improved Dierks Bentley Collage! Read Janet's story in her own words... 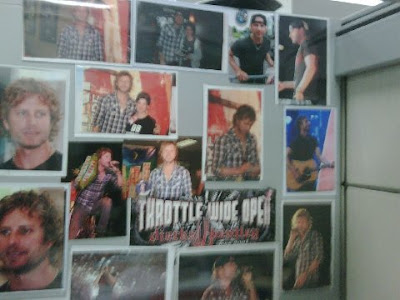 My Meet and Greet Experience with Dierks Bentley on 8-15-09 at the Susquanna Center.

I have been a fan of Dierks Bentley since 2007 and became a fan club member in 2008. I became a DB Congress member a couple months ago.

February 4, 2009 my local country radio station 92.5 XTU hosted a Feel That Fire Fire Album Release Meet and Greet for Dierks Bentley at Dave N Busters at the Plymouth Meeting Mall. It was that day that I meet Dierks for the first time. It was an awesome experience and I found him to be a very down to earth and a caring person.

This past Saturday August 15, 2009 I was selected to have a fan club meet and greet with Dierks Bentley. It was the best twenty minutes of my life. Dierks spent a couple minutes with each fan club member chatting and taking a picture with them. When my turn came around (I was the last person in line) he greeted me with a hug and took a sneak peak of the back of my DB Congress T-shirt to see my sceen name. I go by Wildcat aka Janet from Pennsauken, NJ. 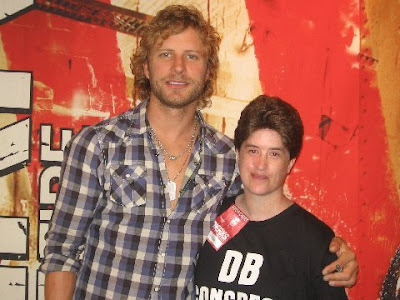 Dierks by himself. I asked "Can I take your pic real quick?" He said sure go ahead. 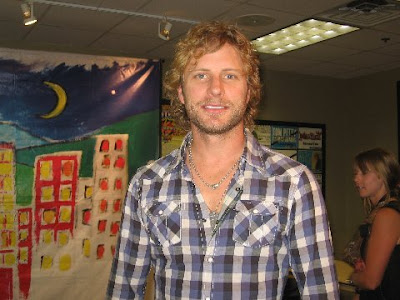 I had brought with me a picture that I took of my workspace at work. Most people have their family members I have a "Dierks collage." (me too, Janet!) I brought two copies one for him to sign and one that I gave him in a photo magentic cover to put on the bus or home or wherever. I said he could put it on the bus and throw darts at it or something. He said No, No, I won't do that but I will put it up on the refridgerator. He thought it was so cool that I would do something like that in my workspace. So now I guess my "Dierks Collage" is now up on the refridgerator or somewhere on the bus. Dierks is still the same down to earth and caring person and it was great to see him again. 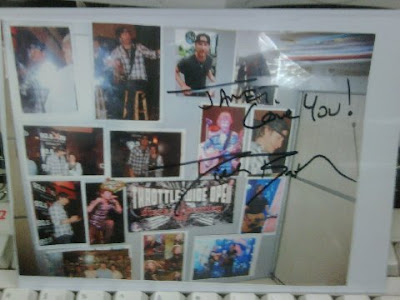 The best investment I ever made was becoming a fan in his fan club. I had bought my tickets through his website through the presale and I sat on the 5th row. This was my first time seeing Dierks in concert and certainly won't be my last. Dierks puts on a very high energy awesome performance singing Sideways, Trying To Stop Your Leaving, Come A Little Closer, How Am I Doing, What Was I Thinking, My Last Name, Free and Easy, Feel That Fire to name a few songs he sang. 45 mintues wasn't nearly long enough so I'm looking forward to when he headlines his own tour sometime next year.

I also met Cindy and Marie again. They are both members of the fan club and DB Congress members. I had previously met them for the first time in February. It was great to hang out with them again before the show.

It was an awesome night! I will be a fan of Dierks Bentley for a long, long, long time!
Posted by DB Congress at 11:41 PM