DIERKS VS. SUPERMAN IN METROPOLIS 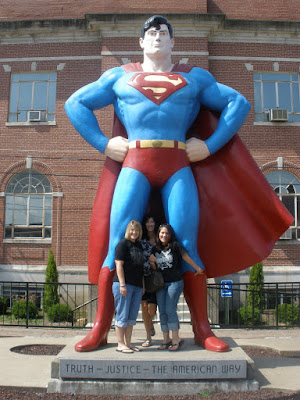 It's A Bird...It's A Plane...No, It's Super Dierks! That's the title of Kim's photo slide show on FaceBook! Kim (DBC rep in Missouri), says this DRT (Dierks Road Trip) started out with just two people--Kim and Bonnie. "As we were traveling to the show we realized that our friend Brooke (also a fan club member) who we met back in 2006 at a Dierks High Times & Hangover show, lived in a town along our road trip to this show. We all went to Nashville for CMA Fest back in 2007 and haven't been together since for a show or otherwise. So we talked her into coming with us to this show--although it was not tough at all to convince her to come along...it was Dierks of course! So this was a reunion of sorts of Dierks members & friends getting together for a show!

It's amazing how Dierks has brought so many people together who've become friends for a lifetime! 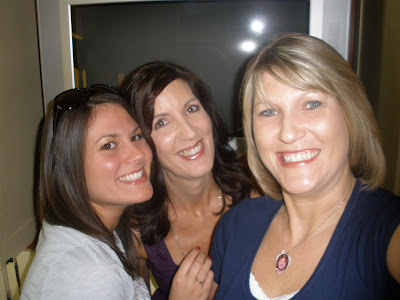 
Metropolis, Illinois is the official Home of Superman and proudly honors its favorite son with a 15-foot bronze statue of America’s Super Hero right in the middle of Superman Square. Metropolis is also home to Harrah’s Metropolis Casino & Hotel, where Dierks Bentley performed Saturday night August 1, 2009. Superman is also the nickname for Dierks' bus driver.

Kim took a photo of Dierks that "really shows Dierks' interaction with the crowd & fans. I just thought this photo was a good example on how he gives the most at every show to all fans," writes Kim. She captioned the photo, 'Really Into the Fans!' 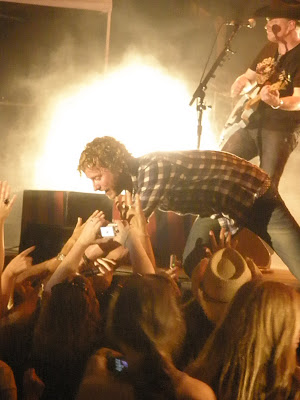 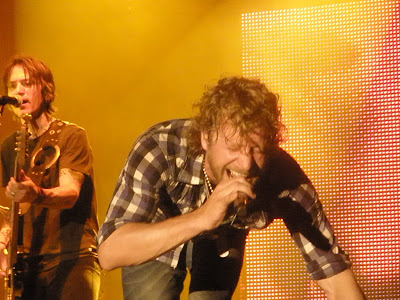 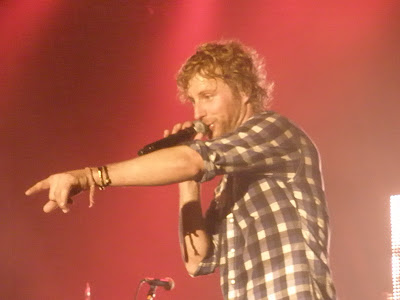 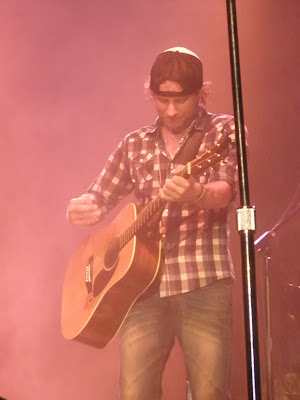 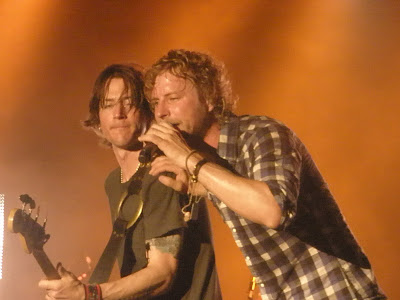 We have quite a few SUPER Dierks fans who live in Missouri and Illinois and represent DB well via the DB Congress. Here's another SUPER story from Stacy (IL DBC rep):

"For starters, Metropolis is 7 hours south of me so we had a long drive for the D man. My friend Kristin and I found out we had meet and greets so that definitely made the trip all worth-while. We got into town Friday night and scoped the town out, drove around the casino and saw the stage in the back and it was HUGE! We went into the casino and lost some money and then found the giant Superman statue downtown so we knew where to go the next day. 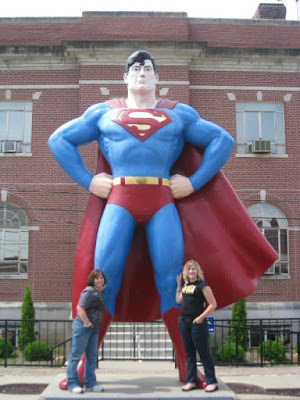 So we get to the casino about 12-12:30 show day and no one is in line! (Very weird for a D show but this was sort of a reserved seating show so I guess there was no need)We go back to the casino and lose a little more money..then we get our tickets and it was weird because we were all seated by "colors". FC members were in the "white" section. We look at the seating chart and realized it was in back of a HUGE VIP section for the casino. We were not happy campers. We asked about m&g passes and they told us they would have them by 4:30. We went back then and they surprisingly had them ready and waiting for us! 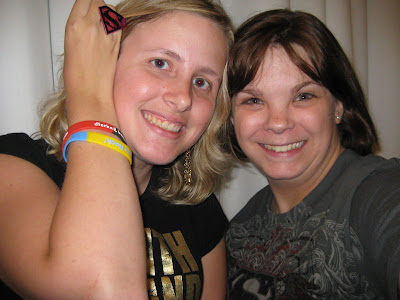 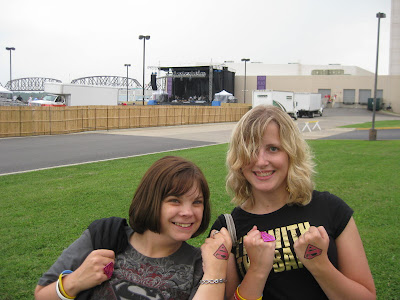 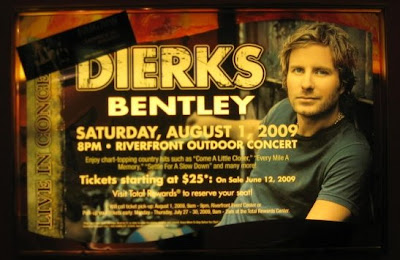 Our m&g was at 6:45 so we go and line up around 6:30. Kristin and I wanted to be last so we worked our way back to the end of the line and it worked out!Brittany the Tour Assistant tells us D will be in in a minute so we wait and we see her peek behind this curtain so we figure that's where he'll come from..but nope! All of a sudden I feel this hand on my shoulder and I turn around and it's Dierks! He looks at me and goes "Hey!"

So he goes through the line and chats quite a bit with everyone. It gets to my turn and he goes "Hey Stace! How are ya hun?!" And I just giggle and smile and go "I'm good!" He then says "So I saw you on T.V.!" And I asked what he was talking about and he goes "I've been watching 'Artist Den' footage and you're in it quite a bit! You look great!" I manage to get a "thanks" out after giggling some more. 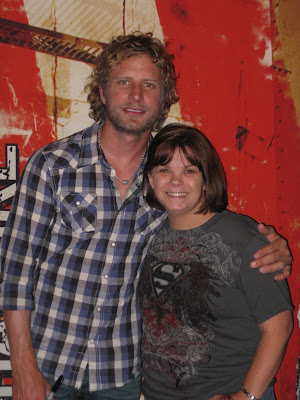 He told me he liked my 'Superman' shirt and asked if I got it in town and I told him no that I got in where I was from and he goes "You're not from here are you?" And I said nope. And he says "I thought so! You're from the Chicago area aren't ya?!" I told him yeah and that it was a 7 hour drive for us and he goes "Wow! You traveled all this way for me?!" I told him yep and that it was worth every mile. Then he says "But you told me back in April you weren't going to see me again?" And I said, "Yeah but that was before this date popped up! And we did some research and decided to come because we weren't sure when we were going to see you again and that we had better come." He goes "Yeah you better come! I'm so glad you did!!!"
Then I get a awesome signature DB hug. :)

He then did his little Q&A session with us and someone asked if Brad had played any pranks and he told us not yet but he has his guard up. Someone asked him about his "accidents" and if he's being more careful and he goes "Oh yeah! I was lucky the front row caught me that last time!" Then he talked about the rain earlier and how he's glad it stopped because he had apparently played in rain in ND the night before and he didn't want to again.
So this is where I get super embarassed. I had forgotten earlier that I had told my sister my M&G time. Well guess who's phone goes off and has a DB rigntone? Oh yeah..me! So D hears it and goes "Nice Stage Dive"! I tell him sorry and he actually grabs the phone and says hi to my sister Amy!
We all gather for our group photo and he gives us all hugs good-bye. He tells me again that it was great to see me and thanks me for coming and to enjoy the show.
The show was great! D was full of energy and lots of of crowd interaction. Security FINALLY lets us up front the last 2 songs and D sees me and points! It also pays to be short and I guess sort of cute because everyone was letting me up front so I could "see." 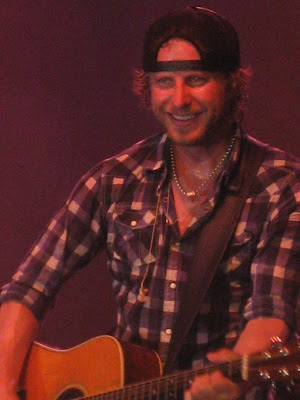 Thanks for the SUPER Dierks stories ladies!
Posted by DB Congress at 9:06 PM