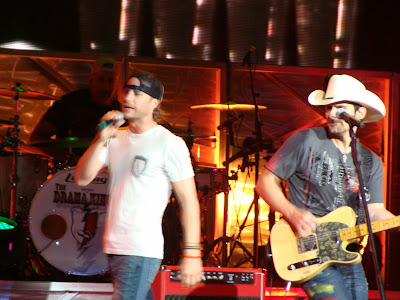 "Although Brad Paisley happily took a break from touring to perform in front President Obama, the country singer is currently busy with his American Saturday Night Tour. In stark contrast to his tour last summer, which featured Taylor Swift and Kellie Picker as opening acts, Paisley scored Dierks Bentley and Jimmy Wayne as openers on his current jaunt.

Said Paisley to CMT, "There's lots of testosterone on the tour, which I've found is a lot like camp. We're sneaking into Jimmy Wayne's bus at night, sticking his hand in warm water and seeing if he'll pee." Bentley hasn't been the target of a prank yet, but he'd better watch his back, as Paisley told CMT, "I've got to do something to Dierks. Here's the thing-I have people saying, 'Don't you have a life?' It's hilarious."