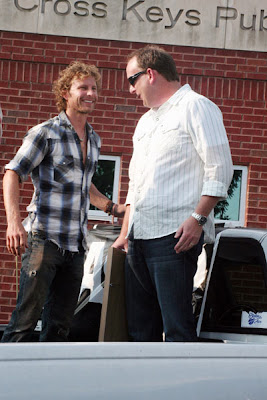 CMT Insider: Dierks Bentley Talks About Getting "Sideways" - August 14, 2009
He and Longtime Collaborator Jim Beavers Score Their First No. 1 Single Together
Dierks Bentley and Jim Beavers have written hits before, but they'd never written a No. 1 single together until Bentley's recording of "Sideways" topped the Billboard country singles chart. They talked to CMT Insider during an interview at a recent No. 1 party on Nashville's Music Row.The longtime songwriting collaborators almost topped the chart in 2004 with Bentley's single, "How Am I Doin'." Ultimately, though, it peaked at No. 4.
After the many hours they've spent writing songs together, it turned out that "Sideways" was one of the easiest songs they've come up with."This one means a lot because Jim and I have written a lot of songs together," Bentley said. "We've spent a lot of time pounding our heads against the wall and trying to come up with some good stuff. It's funny how the one we wrote the quickest became a No. 1 song. For us to celebrate our first No. 1 together, that's really a special thing."
Regarding the song's subject, Bentley said, "For me, getting sideways does involve a few drinks. Not all the time. ... You've been through the straight and narrow all week, and now it's time to be getting loose and loud -- whatever takes me to get sideways and have a good time."
Bentley came up with the initial idea for the song. "That chorus kind of got stuck in my head," he explained. "I didn't have a guitar when I first started writing the song. I was on an airplane ... writing this thing. I came back and told Jim about it. We busted out the guitars and put the rubber to the road on it."
Both songwriters say the song is built around a strong musical groove."He had a cadence to that chorus," said Beavers, who is the brother of Bentley's producer, Brett Beavers. "He already had that, and he had a lot of the lyrics. When he said it, I said, 'Why don't you write that song?' He's like, 'Dude, I don't know what to do next.' I said, 'OK, I'll be happy to try to help you.'
"Regarding the No. 1 status, Bentley said, "It never does get old. ... Every one means a little bit more than the one before because you never know how long the streak is going to stay alive."
Posted by DB Congress at 9:18 PM