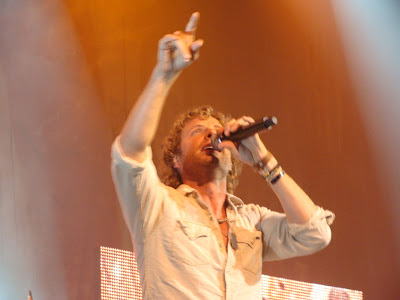 When Dierks Bentley was headlining back in 2007 and early 2008, he tried out a song at a few shows called, "I Sing For Free." Some of you may have heard him perform this. As far as I know, it has not been recorded--until now!

My name is Amy and I wanted to share a DB moment with you. I ordered a CD last week from former Nashville Star winner Brad Cotter. I received it in the mail yesterday and as I was looking over it, a familiar name jumped right out at me. It was our president! Dierks co-wrote a song with Steve Boggard and Brett Beavers called “I Sing For Free,” and Brad recorded it on his current album. I just thought that you would be interested in hearing about it. Thanks for all of your hard work!

Thanks so much for sharing Amy! It's a great song! I hope Brad releases it as a single!
Posted by DB Congress at 9:14 PM