I met New Jersey DB Congress rep Jen (jensting) and her sister Justine for the first time at Dierks Bentley's Last Call Ball V in Nashville in June. Jen admits LCB was "definitely the highlight of our CMA fest trip this year!" Jen and her sister recently saw Dierks again--this time in their home state! Here we go:

"My sister and I saw Dierks August 15th, 2009 at the Susquehanna Bank Center in Camden, NJ. It's only a few minutes away from Philadelphia, PA. There were about 100 total people who had M&Gs for Dierks, but only 20 of them were DB Congress (fan club) members, so we got to go first which was really nice. Dierks said that he wanted to make sure he was able to spend a little more time with the fan club members.

We all got a pic taken with him and an autograph. I had him sign my pic of him and me from this year's Last Call Ball. I told him that I was a nanny and that the kids and I listen to him all the time....that the youngest was two years old and he walks around the house singing "So So Long." Dierks thought that was really cool and said he had no idea that he had fans that young! 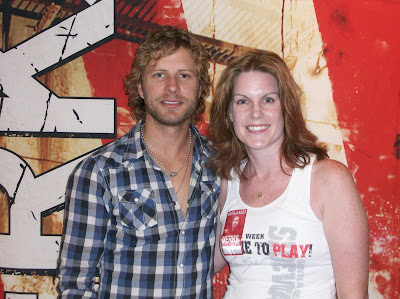 The Q&A was mostly chatting about how he was liking his stay in the city of Philadelphia. He said that he was having a great time and he went over to Center City (although he referred to it as "City Center" which was pretty funny. Nobody calls it that) and was working out at one of the gyms over there; hanging out with some of the people down there and he said he really liked it--said it didn't really feel like a big city at all. Lots of Michael Vick protestors were out, he said. Dierks mentioned that Jake's not too happy with the whole Michael Vick ordeal, and we all agreed. Then he told us that he got lost earlier that day in Camden when he made a wrong turn. We were all sympathetic because we know it's not a city you want to be lost in.

Dierks mentioned playing the XTU show a few years ago and House Of Blues in Atlantic City, saying that he really liked that venue and would love to play there again. Somebody asked him if he would be back next time as a headliner at the Susquehanna Bank Center and he said "Hell, Yeah!"

Then they took a big group photo and it was time to go. He hugged all of us goodbye and thanked all of us for coming (which I thought was really nice. He is always so genuinely happy to see his fans.) As we were leaving my sister mentioned to him that he should come back to Prospectors in Mt. Laurel, NJ (a small country club/saloon--very intimate and great to see shows there). He said that definitely he would, and that he hadn't played there in a long time and would love it. Hopefully he will. Then later on in the show he incorporated hanging out at Propectors ( into the song "How Am I Doin"....we were so excited to hear that!

It was a great show. And hanging out with him before hand was the best way to spend an American Saturday Night. It honestly felt like we were all just chilling with our friend before hand. Dierks is just a down to earth guy. It was a lot of fun."