DIERKS ON TOURING WITH BRAD 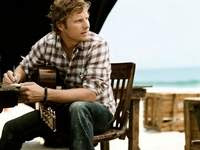 Feeling that fire
Dierks Bentley's 2009 CD was his first recording in 3 years. The wait was worth it.

Brad Paisley, Dierks Bentley, and Jimmy Wayne will perform Thursday, Aug. 27, at 7:30 p.m. at the Crawford County Fair in Meadville.

Dierks Bentley could have headlined his own concert tour this summer. He's a superstar in his own right with six No. 1 hits, including 2009 chart-toppers "Feel That Fire" and "Sideways."Instead, Bentley opted to hang out with Brad Paisley all summer. He's opening the superstar's tour for "American Saturday Night," which includes an Aug. 27 stop at Crawford County Fair.

"I've known him for a while, but I never really had a chance to spend a lot of time with him," Bentley said. "It's part of the reason I wanted to do this tour. I'm a big fan of his music. One of the deciding things was I got to hang out with him more often."Never hurts to play in front of stadium-sized crowds either. The Paisley / Bentley / Jimmy Wayne package ranks as one of country's biggest 2009 tours.

"It really gives people bang for their buck," Bentley said. "And with a new record coming out, we wanted to play for as large of crowds as possible, so it made sense to go out there [with Brad].""Feel That Fire," released last February, was Bentley's first CD in nearly three years, an unusually long dry period."It just took time to pick the songs and, in the studio, put it together," Bentley said. "If you write your own material, it just takes longer, and I write most my stuff."

The wait was worth it. Bentley, one of country's strongest singers, sounds relaxed and in total command on a strong range of songs, including bluegrass ("Last Call" with Ronnie McCoury) and rockabilly (the stomping "Little Heartwrecker")."What I love about country music is it captures different sides of life -- the good times and bad times," Bentley said. "With this one, I think, I tried to make sure it tipped the scales in the fun category.

Still, there are what I consider some serious pieces of work on there, like 'Beautiful World.'"The latter song features Patty Griffin, one of his favorite female singers, on backing vocals."That was a huge deal for me," Bentley said. "She's pretty iconic, and I thought it might be a reach to get her to be part of something. But I was lucky. I'm hoping it might be a single down the line.

"Title song "Feel That Fire," he said, is currently his favorite tune to perform each night."It just gets a huge response."So does the gusty, shout-along "Sideways," the last song written for the CD, which hit No. 1 in July."We wanted one more fun, up-tempo song," Bentley said. "I wanted one out in summer that was a no-brainer that people can sing along to and know the words to. I was on an airplane, and it came to me quick. I've been kicking the show off with that song."

By the time he reaches the Crawford County Fair, Bentley figures he'll have a new song in the show -- "I Want to Make You Close Your Eyes," just released as the third single. The romantic change of pace is akin to his earlier hit, "Come a Little Closer."

Bentley gets about 45 to 50 minutes to perform, so he packs in the hits, along with the new songs. He's a man in motion on stage. Good thing he works out, both at the gym as well as on the ice. He plays hockey, left wing or center."I got into it because we have the Nashville Predators in town," Bentley said. "It's the most fun sport you can play."Plus, it's not as dangerous as, say, as singing country music."

I've had more injuries falling on stage than from playing hockey," Bentley said. "Once, I ran and jumped down on my knees, sliding. The end of the stage had this hardwood floor, slick as an ice rink. I just kept going, never stopped."I ended up in a fan's lap. I was a little slow the next morning."

Feel that pain by day; feel that fire at night.