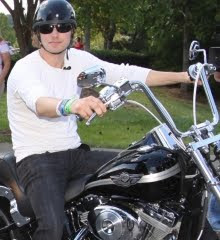 Every year I say I'm going to go to DB's M&M4K event. Every year I end up spending all my money on other DRT's throughout the year! This year is no exception.

Dierks Bentley will host his fourth annual "Miles & Music For Kids" celebrity motorcycle ride and concert on Sunday, Oct. 11 in Nashville. Since I have seen him 7 times already this year, and he will be in Tampa 5 days after this event, I'll have to pass yet again. *Sad face

Sponsored by Nationwide Insurance, all proceeds from the event will benefit the Monroe Carell Jr. Children's Hospital at Vanderbilt, a Children's Miracle Network Hospital. The ride begins at Harley-Davidson of Cool Springs and goes through beautiful Williamson County and Historic Downtown Music City. The ride ends at Riverfront Park for a two to three hour concert "Jam Session" in a festival type setting. Joining Dierks will be Darius Rucker, Eric Church, and more of Dierks' friends to be announced in the coming weeks.

"This has always been a pretty special deal, and then last year my daughter was born at Vanderbilt the same day as our event and that really put things in perspective for me," says Bentley. "It's cool that guys like Darius and Eric are willing to come out and help us raise some money, so that our community can continue to benefit from the hospital's services."
~Dierks Bentley

This year, Bentley has joined forces with Nationwide Insurance, CMT ONE COUNTRY and the Children's Miracle Network to expand the successful "Miles & Music for Kids" event to six cities across the country in 2009 and 2010, with all proceeds benefiting Children's Miracle Network hospitals in those areas. In the three previous years, "Miles & Music for Kids" has raised over $500,000 for Children's Hospital. Click here for ongoing artist announcements.
Tickets are still available through Ticketmaster.

$300 Ticket includes: A Ride in the Pack with the Artists and VIP Concert ticket with access to VIP Concert Tent with food & beverages & T-Shirt.

$50 Ticket: Good for Regular Concert ticket and Ride and T-Shirt ( 1 Rider only ).

I hope many of you DB Congress reps can participate in the Nashville event and support Dierks in this worthy cause. As soon as the dates are announced for the other 5 cities we'll be sure to let you know!
Posted by DB Congress at 4:46 PM