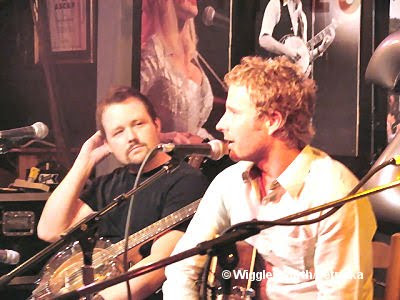 Now four weeks into his new radio show on WSM 650 AM, Dierks Bentley spent the hour yesterday recalling his ground zero experience. Calling the cafe 'hallowed ground', Bentley let his audience get to know the songwriters, artists and musicians who put The Bluebird Cafe on the map in Nashville, Tennessee.

The photo above is from the 25th anniversary at The Bluebird Cafe in 2007 with Dierks and his What Was I Thinkin' co-writer, Deric Ruttan.

After his own "My Last Name" played as a pre-show starter, DB put on Kathy Mattea's, "Goin' Gone" from in 1987, reminding us it became her first number one. After she got a record deal, 'the bird' became the place to play.

The Bluebird Cafe has launched several musical careers and become a hotspot for songwriters to hone and display their craft. Owner Amy Kurland lists the first Women in the Round show--whom Dierks raves about during the show--as one of the most memorable nights in the cafe's 25-year history.

The Bluebird Cafe's Original Women in the Round--Ashley Cleveland, Tricia Walker and Karen Staley became a part of Music City history when they performed in the first Women in the Round show at the world-famous Bluebird Cafe almost 20 years ago. The three singer/songwriters, who were joined by Pam Tillis for that Feb. 4, 1988, performance.

"Part of the first gang at the BB, Don Schlitz - wrote songs that changed the landscape," Dierks tells us. Like The Gambler by Kenny Rogers, that won CMA's Song of the Year in 1980, an ACM and a Grammy.

Thom Schuyler wrote over 200 cuts, and one of his biggest was Lacy J. Dalton's, 16th Avenue (god bless the boys who make the noise on 16th avenue).

Forever and Ever, Amen. "There's a song that had a huge influence on me. If you did not recognize that voice as Randy Travis, you're listening to the wrong radio station," jokes Dierks.

Dierks admits he drank about a thousand beers to this Hal Ketchum song, Small Town Saturday Night, written by Pat Alger. Pat also wrote many a song for Garth Brooks, like the classic and timelessThe Dance, written by Tony Arrada. "You can't talk about the Bluebird Cafe without talking about Garth," says Dierks. "Garth's first time walked in the door for an audition at the BB was June 6, 1987 and he passed his audition, performed, and was signed the next day by Capitol Records."

"I can remember waiting in a long line to try to get a showcase there, then you had to wait for this one particular date, then you waited about three hours to get on stage, then you sang and then they sent you a letter a couple weeks later to let you know if you passed your audition and set up a later date to come down there and perform for a lot of the folks on Music Row. It was kind of like 'Bluebird Idol.'" I passed my audition--of course I didn't go on to take over the rest of the world like Garth did, but I did have some success [laughs] stemmed from there myself."

Dierks picked out another particular Garth song that he says might have influenced his own, "What Was I Thinking," -- Ain't Going Down Til The Sun Comes Down.

After spending the bulk of the show on the songwriters (my favorite part!) Dierks became modest as he remembered the artists to come out of 'The Bird.' "Not to talk about myself in the same category as Garth, but my first time playing the Bluebird was November 16, 1998. I was so nervous...I said I'd play before I turned 24--my birtday's on the 24th (it's actually the 20th, right?) - and I forced by self to go down there--4 days before. I was at least better than half the folks in there, so it gave me alot of confidence."

Dierks has a natural sense of humor, but got serious in a hurry when joking about a certain 13-year-old who hadn't sold many records after playing the Bluebird a few years back. So he offered to go and buy her album to help her out. All kidding aside, he's quick to point out that Taylor Swift has taken over the musical planet, before launching into "Tim McGraw," co-written by a fellow 'Bluebirder', Liz Rose.

After the songs, Dierks calls Taylor "the eighth wonder of the world."

I wanted to dedicate this show to the Bluebird and all the great folks that work down there, the history of that building and all the artists, songwriters and musicians.

Mentioning myriad musicians, Dierks ends the show with a feature of Jelly Roll Johnson's harmonica playing on Turn It Loose, by The judds.

This show has been my favorite so far! Nashville is one of my favorite cities and although I have visited Music City 100+ times, I have yet to set foot in the infamous Bluebird Cafe! Now I'm on a mission! This is the year!

Download the show from the audio archives on dierksfans.com!

I can't wait until next Monday at 2 pm central, to hear another country music history lesson, narrated by Dierks Bentley via, "The Thread!"
Posted by DB Congress at 9:13 PM