Marty Robbins was born in Maricopa County, Arizona, only a few miles from where Dierks Bentley is from. It was only natural for Dierks to dedicate an hour of music on April 19, 2010, to and about another home town boy that successfully made his county music journey to Nashville.

Marty had a TV show on KPHO in Phoenix where he and Little Jimmy Dickens became friends which led to Marty's record deal. Dierks shared that his mom played "Devil Woman" a lot in his house growing up.

"The fact that Marty was from Arizona always made me feel a close connection to him."

Marty was a member of the Grand Ole Opry and was well known for his performances at the Opry, especially his habit of walking over and manually moving the clock back to 11:45, when they were supposed to be off the stage by midnight. He was a real renegade.

According to Eddie Stubbs, Marty would go out in front of the Grand Ole Opry House and sign autographs. Marty was also a NASCAR driver. He always tried to get on early for the Opry so he could run out to the track and race the same night. 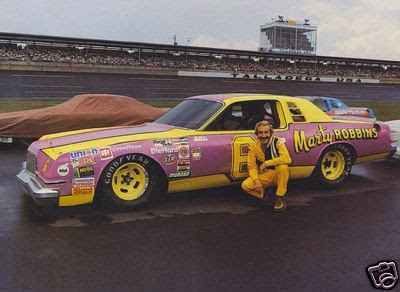 Marty had a wide range of music and styles, and especially the western sound (as in El Paso). "For me being from the west, once it's in your bones it's kinda hard to get that out of it," Dierks said.

Partial Play List:
-Devil Woman
-I'll Go On, (First hit in 1952; a little Hank Williams sounding)
-White Sport Coat (and a pink carnation)
-Big Iron
-Cowboy in a Continental Suit
-Ruby Ann
-El Paso (#1 in 1960)
-El Paso City
-Singing The Blues (Dierks' fav!)
-Knee Deep In The Blues (An Elvis-type delivery)
-Don't Worry (#1 in '61; session guitar player Grady Martin created the fuzz affect by accident from this song)
-The Girl With Gardenias In Her Hair
-My Woman, My Woman, My Life (he won a Grammy for this one, dedicated to his wife of 22 years!)

Two of Marty's greatest accomplishments include becoming a member of the Country Music Hall of Fame in 1982 and being named Artist of the Decade by the Academey of Country Music.

Log on to dierksfans.com and go to the Audio section of the message board for instructions to get a link to the audio copy of The Thread radio show.

Coming up this Monday 4/26/10, on The Thread: Keith Whitley has been a huge influence on Dierks and his music. Listen in to hear Dierks pick select Keith Whitley songs and talk about Keith's life in song.

Dierks Bentley hosts The Thread on 650 AM WSM radio every Monday at 2pm CST. You can listen online at wsmonline.com.
Posted by DB Congress at 2:11 PM