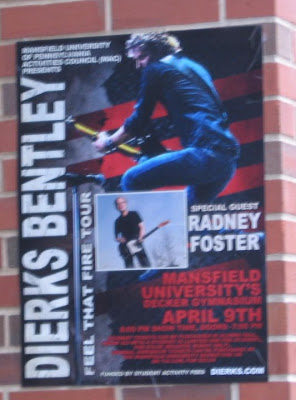 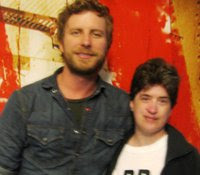 I had previously meet Dierks at a meet and greet last August in Camden, NJ and saw him in concert for the first time that day. I couldn't wait to see him in concert again and I got my chance to see him on April 9, 2010 in Mansfield, PA. It was my first Dierks Road Trip and fellow DB Fan Club Member Marie from PA came along with me. She and I both where selected to have a meet and greet with Dierks for that day. It was a four hour drive for us to get there so we decided to book a room at the Comfort Inn to make life easy on us.

We got checked in at the Comfort Inn around 3. We decided to take a drive and see where to park and all that good stuff. We knew we were in the right place as we drove right past Dierks' tour bus that was parked on the side of the building. Turns out the road I was driving on was going to be only one way the night of the concert so we found an additional parking lot up the hill. No spotting of Dierks as we drove past his tour bus and into town to get something to eat and then back to the hotel where we met up with Jane, fellow DB Fan Club Member from NY and her friend Fran. Jane didn't get selected for a meet and greet this time but she has one in May when she will see Dierks in Maine. 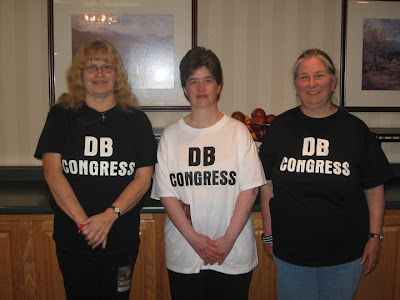 We all decided it would be best to take one car and meet at the car after the concert. We got in line to get our tickets and meet and greet passes. They need to figure out a better system for this--it's very stressfull on a person! Once it got straightend out, we got in line and waited for the doors to open which was to be at 7pm.

Meet and Greet:
The 12 fan club members gathered on the stairwell for the meet and greet to begin. Dierks was meeting with another group first and wanted to spend some extra time with us so our group was last. 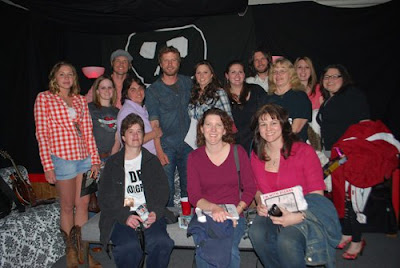 The last time we had met, I had given him a picture of my workspace cubicle that I had made a "Dierks collage" on my side file cabinet. I brought a more updated copy with me for Dierks to sign and one to give him. I should have kept one in my pocket because the copy got taken away--not a big deal since I gave it to him later. When it was my turn to meet Dierks he remembered my workspace cubicle pic from the last time. I didn't have any family pics on there the last time I told him, but I had a family picture with my grandfather. I told Dierks that my grandfather had turned 100 years old the day before and Dierks' response was, "Wow, that's amazing." Now here's the part that nobody in the room will ever forget. As I was walking away from talking to Dierks I totally forgot there was a little step, and what do I do? I tripped and stumbled onto the floor in a big thud. I was ok just very embarrassed. I was helped up by his meet and greet staff person and Dierks asked if I was ok, which I replied I was fine just a little embarassed. His response back was, "don't worry about it...happens to me all the time on stage."
Dierks continued with meeting the rest of the fan club members. His staff members came over to make sure I was ok along with fan club members. I said I was fine just needed a bandaid for my finger.

Once Dierks was done with the last fan club member he walked us all back to his dressing room. I captured the moment of walking down the hallway with Dierks Bentley by taking a little video clip.

He gave us all a preview of his upcoming single, Up On The Ridge, which I really love and took a video clip of that, too. The room itself had a nice vibe to it with candles being used to light the room. Next was the group pic and then one final goodbye to everyone. I said to him, "Well you won't ever forget meeting me now." We both laughed and his response was asking if I was ok. I said I was fine as he gave me a hug goodbye. 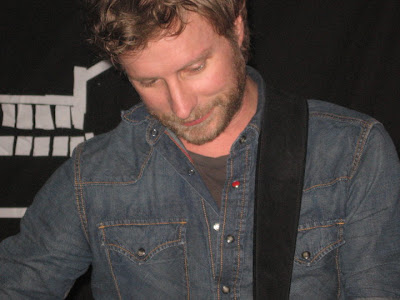 I know I won't forget this meet and greet experience for all time along with the rest of the fan club members that were there.

The concert, as I expected it would be, was awesome!