'FESS MY LOVE FOR YOU AGAIN, D. BENTLEY 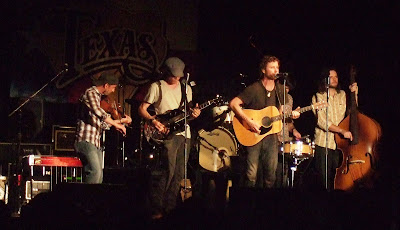 Confessions of Mrs. Concert Crazy: A Tale from Texas

Before I start our Miles and Music Texas story, I need to give you a little back story. Picture it: Missouri, 2008. A fellow Dierks fan (Takara) and I plan an innocent little road trip to Nashville to attend the Miles and Music concert held in October of that year. It sounded like an awesome excuse to raise funds for a good cause, and see good music at the same time. We went and had a blast! We hung out at the Harley dealership for a bit then headed down to the concert. On the nine hour drive home, I had plenty of time to think about the fact that for the next one, I really wanted to RIDE in it. Now…my husband has had a motorcycle for years but I had absolutely ZERO desire to ride it. A. they are scary and B. Hubby has a sports bike and well, lets just say I don’t have a skinny sports bike chick butt. BUT I really, really wanted to do this ride!

So, I got my rear in gear, learned how to be a good passenger, got a cute hot pink helmet, and come 2009 we threw it all in the pickup truck and headed to Nashville. The Nashville ride had about 90 million bikes (o.k. I exaggerate. That’s how I roll) and was a slow cruise through pretty Tennessee countryside, with a few twists and turns along the way. It all ended with a fun drive into downtown Nashville. Easy as pie. 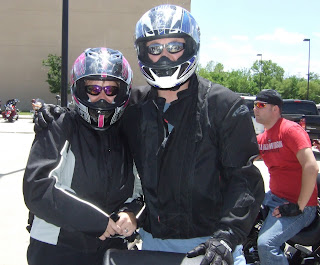 After the Nashville Miles and Music event, I casually mentioned to my hubby that Dierks was also doing a ride in Texas at some point the next year, 2010. A little bit later my favorite closet Dierks fan casually mentioned that, well, you know, Dallas was just as far as Nashville is from us. Cha-ching-looks like we are headed to the Big D. And I DO mean Dallas!

Before I get much further in to the story, I have a confession to make. Not only are we Dierks fans, but recently we have become fans of some of the music filtering out of Texas and Oklahoma. That,I have to admit helped stack the deck in our deliberations on whether or not to go. Some of these acts get maddeningly close to us here in Kansas City, but not very often. Getting to see Dierks, some Texas music acts we haven’t seen, a motorcycle ride, AND raising money for charity…hello no-brainer.

So after a few months of waiting we finally get notification of when the date is (from a fan and not the website) and a notice of the presale date (24 hours before the presale started-tsk tsk). I figure we will need some time to think about this but oh no, Hubs is ready to buy tickets and get ready to go (but he will tell you he’s not really a Dierks fan.) Long story short, 12 hours later we have everything bought and our seats picked out. Whoo-hoo! Can’t wait!

Flash forward to April 24th, and once again everything is loaded in the truck and we are ready for a nine hour drive across Missouri, Oklahoma, and north Texas. Note to roadtrippers-if you are traveling through Oklahoma, bring a lot of dollar bills because I’m pretty sure the whole state is one long series of turnpikes and toll roads. It’s a pretty drive though. We arrive in one piece and settle in to wait for the ride and concert the next day. 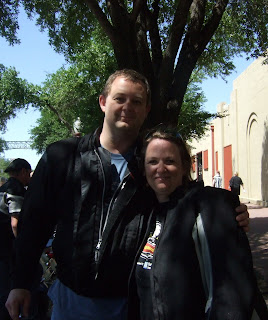 The next day dawns bright, sunny, and mild and we get ready to get on our way to the Harley dealership. Now, I have to tell you-if you haven’t been, the Nashville Miles and Music seems to be becoming quite the big deal. Not only do you have the people riding in the ride, but a lot of extra people come and hang out as well. It’s a fun atmosphere and you are always kinda looking around seeing who you might see, star-wise, and every now and again you are rewarded. The Texas event was much more low-key and much more biker-ish which was fine. They had live music, the local H.O.G. chapter was cooking burgers and dogs, some girls were washing bikes for charities in bikinis, and everyone just kinda hung out.

After a hanging out for a little bit, my husband points past the bikini girls and says “There’s Dierks.” Keep in mind though-he’s not much of a fan.  Or so he says. So we wander on down that way to where Dierks was doing a couple interviews. Any of you that know me know that I am more of a hang-back-and-watch person, instead of a push-my-way-to-the-front person, so I just hung back and snapped a couple pictures. Mr. Bentley finished his interviews, signed some things, took some pictures, and then headed back inside. Very casual, no “people” not a big deal. Some of the riders were saying “who is that?” which I thought was pretty funny. It’s all about the ride and the charity sometimes, not whose name is attached to it. 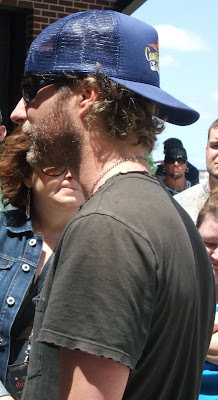 After he went inside we wandered over to the stage to wait for him to come out and address the crowd. Which he did, and introduced people, talked about the ride, we all said a little prayer together, and it was time to hit the road.

As I mentioned before, I’m pretty new to this whole motorcycle riding business. I do ride when the weather is nice and it’s a weekend. And when it’s not on a highway. I WAS deathly afraid of riding on the interstate. Cars are unpredictable, the wind sucks, and it’s just scary. So imagine my surprise when we hop on, start the engines and BAM! head out on the interstate. Oh crap. I was expecting a gentle ride through the Texas countryside! I spent about 20 minutes scared to death before I realized the world wasn’t going to end and I was going to be okay. Good thing too, because we spent an hour and half on the highway. Going 70! But by the end, I was even snapping pictures and enjoying the beautiful scenery. Another fear I have gotten over, thanks to one curly-headed crooner. Soon enough we were in Fort Worth and at the famous Billy Bob’s!

I was in awe of Billy Bob’s. It was so huge! And to think of all the people that have played and recorded albums there-I was in heaven. They have tables instead of a “pit” area so we had a place to sit and didn’t have to fight for spots with people who didn’t ride and could have gotten there sooner. The flip side is because we are cheap our seats were a little bit farther back. And since it’s hard to carry a big camera on a little bike, I don’t have many good photos. Minor Bummer.

We settled down to hear music from people we had never seen and most of you may not have heard of--Brandon Rhyder, Roger Creager, Stoney LaRue-good stuff! Give some of them a listen if you haven’t already. If you haven’t heard of Kristen Kelly and the Modern Day Drifters, man that girl can sing her socks off. Paul Overstreet came out and performed with Roger Creager and they put on a good set. Roger can play a harmonica, that’s for sure. Paul Overstreet sang a blues version of “Digging up Bones” that was fun. Jack Ingram and the Eli Young Band were there as well. I love the format of the Miles and Music shows. Unless you are a ‘band’, the artist just comes out with a guitar and plays. Very stripped down. Except Dierks, of course!

Speaking of, it was time for the main attraction! I had just seen DB in Arkansas a couple of weeks ago and while the show was good, the experience was just kind of –eh-so I really didn’t know what to expect from this show. I was pleasantly surprised! The sound was awesome and I don’t know if it was the venue or the whole charity thing, but D was in a really good mood and what I call ‘on it’!

A couple of things-I will probably always, always miss Rod and Robbie, because that’s all I’ve ever known as a fan, but since the ‘new guys’ have come along they have put a couple new subtle takes on the oldies but goodies. And you know what?--they sound pretty good. There is no harm in keeping things fresh and fun. Speaking of which, after the bluegrass set-which was VERY well received, by the way-Jason Carter, the fiddle player from the Travelin’ McCoury Band stayed out with boys and played a few songs and all I have to say is WOW. Once again, adding something new and unexpected to the songs-let’s face it-we have all heard live before was completely amazing. That version of Come a Little Closer with the fiddle-uh totally worth the drive. Dierks: hire a fiddle player full time! He also played on Free and Easy, WWIT, and I think Settle if I remember correctly. Maybe Every Mile, although apparently I was in some sort of fiddle happy daze.

One of the funniest parts of the concerts was when, once again, Dierks accidentally rearranged the words to his own songs. He totally forgot which words went where during “Eyes”. This has happened so often I’ve started calling messing up the words to songs you wrote “dierksing” the lyrics. As in-dude did you hear that? He totally dierksed the second verse! I kid because I care, lol. This makes me giggle every time it happens at his shows. Oh my favorite blonde scatterbrain. I can relate since I can’t remember which of my children belongs to which name. It’s an endearing quirk that makes him a little human and a little less like some performer-bots.

They wound the show up with an encore of everyone except Jack Ingram (where was Jack, anyway? Perhaps I don’t want to know) coming out and singing ‘I Don’t Think Hank Done It This Way’ which, once again, was awesome. I’m using that word a lot in this blog! After it was over Dierks stayed out and signed stuff and slapped hands for a good 15 minutes or so. After a crazy Luke Bryan experience there was no way I was going to get involved in that melee so I just stood back and watched.

As a fan, I always, always, always wish Dierks the big time success he wants for himself, but honestly I have to say I haven’t heard him sound better or look happier than on the small stage of that big ol’ honky-tonk in Texas. Thanks for all that you do for charity Mr. Bentley and all that you do for us as well. We had an amazing time and me and my closet fan husband will see you down the road. To all my Congress friends…look twice for motorcycles. It could be me. Or Dierks Bentley. You never know!
Posted by DB Congress at 8:33 PM