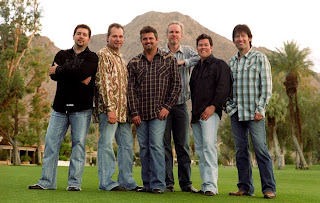 You may remember Dierks Bentley's 2006 album, Long Trip Alone, featured The Grascals on the last cut called, Prodigal Son's Prayer. That collaboration still resonates with the Bluegrass band as they speak often of Dierks in a conversation/interview with Jessica Cornett.

Jessica: I know how important that is [relationship with fans] in the industry today, no matter what genre you're playing.

Jamie: Earlier today, Jeremy Abshire and I played cornhole with some folks. There was a stall in the day so we went out and play cornhole with them. They were out there screaming and brings the fans to you. Dierks (Bentley) is good about that; he'll go out to his people. You'll watch and learn.

Terry: Dierks does a lot of that computer stuff like every day.

Jamie: Yep sure does.

Terry: Jamie's the one that does that for us. I'm stupid about that. Computer illiterate.

Jessica: How does it feel when others, like Dierks Bentley, say that they have been influenced by your music?

Terry: Other than, you know, it's great. I mean it's wonderful to know that you've touched somebody's life through music, what you enjoy doing. Music is emotion. That's what it is and to touch them through an emotion like that it's one of the greatest things in the world you know. That's how I think about it.

Jamie: It's an honor really. I mean honestly, I've sat there and with Dierks and watched him sing. We sat there at the same table drinking a pitcher of beer and watching him sing thinking dang I like him. To watch somebody like George Jones, or Haggard, people don't sometimes write the song but can still sing it as if they did. That's not something you can learn, I don't care who you are. I do okay at some of them. The majority of my songs, I sing to the best of my ability. To really learn that, that's just a God given talent. We appreciate the people that respect that. I salute Dierks for pointing that out. Shoot, I wrote the title cut of this album, but I want him (Terry) to sing it. It's an honor to learn from people like I do really.

Thank you Grascals for honoring our DB Congress president with your kind words!

Email ThisBlogThis!Share to TwitterShare to FacebookShare to Pinterest
Labels: Dierks Bentley, The Grascals