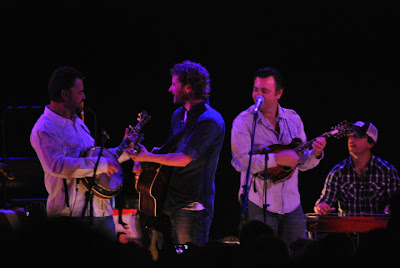 Tonight, Dierks Bentley continues his Up On The Ridge pre-album release tour in Colorado Springs, Colorado, where the snow is falling in late April, as seen from his windshield (Facebook): 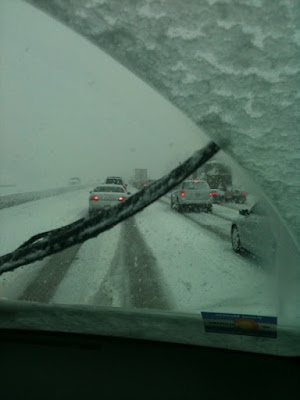 Tomorrow night, Bentley and the Travelin’ McCourys, will travel to Austin and perform at The Parish. Austin360.com asked DB a few questions about the new material, the tour and his tourmates.

American-Statesman: You anchor the new album’s title track on a traditional bluegrass theme: escaping to the countryside.

Bentley: On the road, a lot of the time all I’m thinking about during the day is, “Man, I wish I was out in the woods somewhere by a lake and not stuck on the asphalt.” It’s about the need to get away and have fun.

Was your creative process different from recording a straight country album?

Yeah. The process was really different for me. I didn’t work with any of the people that I’ve worked with in the past as far as writing or production goes. Making that break was important creatively. I cut more outside songs on this record. I’m a big Shawn Camp fan, and I knew I wanted to cut a couple of his (“Fallin’ For You,” “Fiddlin’ Around”).

What drew you to the (Kris) Kristofferson song (‘From the Bottle to the Bottom’)?

There are just no gaps at all in that song’s alliteration and pentameter and meter. It’s tight, so well-written. Cutting that song was a great moment and a great memory. When we were in the studio, (Kristofferson) said to me, “Next time I write a song like this, remind me not to put so many (expletive) words in it.” That chorus does take a big breath of air to get through (laughs).

How do you expect this new material to translate at The Parish?

It’ll be a dynamic show. I think my hardcore fans will love the new sound and the casual country fans hopefully will like it. If not, maybe they’ll respect that it’s something different and not the same old, same old.

Was it your decision to tour the album at such intimate venues?

I like playing smaller rooms. I love playing amphitheaters and fairs and all that stuff, but I love variety. We’re gonna do what I got into this business to do: Get on a bus and play some music. I want to get one bus and one band and one crew and play fun, cool places that I don’t get a chance to play anymore.

You and the McCourys are old friends, right?

I was at (banjoist) Rob (McCoury)’s wedding, and I was one of the (groomsmen) at (fiddler) Jason Carter’s wedding. I’ve known those guys since I moved to Nashville in 1994. I feel lucky and honored to play the host, to bring these guys and their music to my audience. They’re some of the greatest musicians in the world.

When did you meet (tour opener and Austin resident) Hayes (Carll)?

I discovered Hayes in Canada when we played some festival. I walked over to the side of the stage and saw this guy playing at 12:30 in the day, and figured he must be a local. It sure looked like an Austin band, though. He launched into (“She Left Me for Jesus”), and I was just dying over in the corner, going, “Oh my gosh, he’s gonna get killed!”
Posted by DB Congress at 7:17 PM