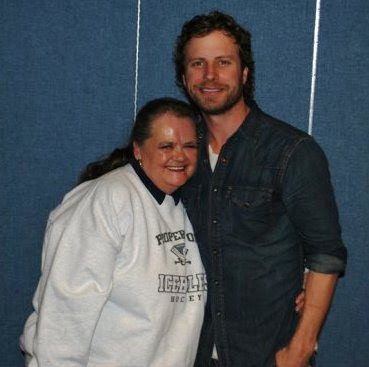 Colorado called Dierks Bentley's name last week, where he performed two shows back to back - Boulder and Colorado Springs. DB Congress rep, Janet, lives in Pike's Peak's backyard (The Springs), and attended both "Up On The Ridge" shows--and the Springs was sold out. Heeeeeeeere's Janet!

"No review I could write could describe the evening better than what appeared in our local paper! The last two nights were a real treat! I highly recommend everyone who has a chance to attend one of these [bluegrass] shows to do so without any reservations. You won't be disappointed! There is no glitz and glamour, and no lights (well maybe a few light bulbs) just good ole fun! Tim gave me a set list but everything is mentioned in the artice. 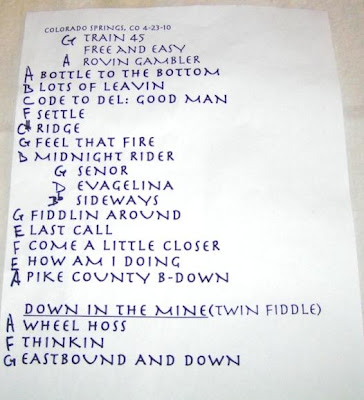 Despite my fall in Boulder, getting lost, getting a speeding ticket and police escort to the correct hwy, 4 hour drive back to Colo. Springs in a blizzard, and tornado warnings I'd do to all again in a heartbeat!

Dierks brought his sister, Vanessa, on stage in Boulder to introduce her to the crowd. His wife Cassidy was also in Boulder and her parents in Colorado Springs. Dierks introduced them and said that his father-in-law is an Air Force Academy alum from 1973. Dierks also called his cousin from Creed, CO on stage to perform a few songs with them and show off his banjo-playing talent.

Since no camers were allowed as the Air Force Academy in Colorado Springs, we used Dierks' camera for the Meet and Greet. I had him signed my 'Dierks Bentley' credit card. He was shocked, but thought it was cool--even showed it to everyone!" 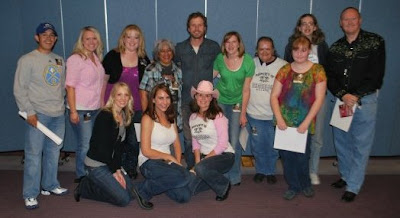 My daughter, Monica, had a M&G in Boulder. 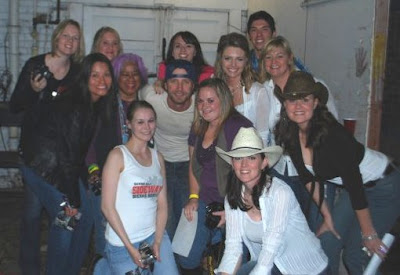 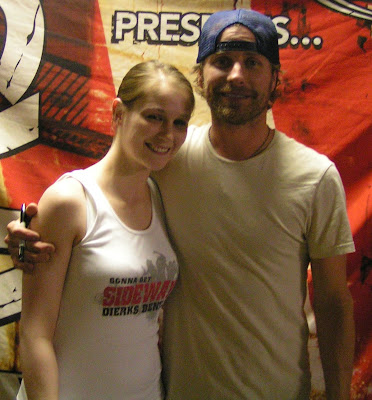 Here's an excerpt from the Gazette article:

Sloppy spring snow didn’t dampen the spirits of the 3000 largely youngish crowd attending the sold-out Dierks Bentley performance at Arnold Hall last night. Dressed mostly in cowboy/trucker or honky-tonk/cowgirl motif, the rowdy but respectful audience paid homage and got treated to a night of folk and bluegrass-laden classic country music from Dierks Bentley and friends...

After a quick stage change-over (after Hayes Carrl), Dierks Bentley and band came out on the plain understated set to a thunderous welcome most pop performers would have reveled in which had the audience literally standing for the first 14 songs, I kid you not! The overwhelmingly interesting thing about all this is that while Dierks is admittedly packing those sly country-boy good looks kind of like Matthew McConaughey evoking screams of “take off your shirt” more than once during the evening, this wasn’t some pop superstar. Tonight the music was more in support of his new album “Up On The Ridge” (Capitol Nashville, 6/2010) featuring mostly acoustic instruments performing bluegrass with some country thrown in. There weren’t flashing lights and confetti canons ala Taylor Swift, this was more reminiscent of a backyard barbecue & Appalachian style hoedown like you’d feel lucky to have stumbled across while crusin’ some little burg off route 40 out of Nashville.

And the crowd was all over it! Dancing in the aisles, screaming, everybody singing along to Bentley’s most popular tunes.... Read the rest here.

"What the reporter didn't mention was the underwear. Some girl threw a pair of thongs on stage and Dierks passed them off to one of the McCoury brothers. Just in case there was no time for laundry on this 30 day run he could go "Commanche"! Yes, there was a lot of younger audience members, but a fair share of mature concert-goers, too. I did overhear a few young girls talking after the show; apparently they didn't know it was going to be a bluegrass show and their dissapointment was evident. But they could not have been fan-clubbers or they would have known and loved it!

After the Boulder show we were all given a CD with 3 songs on it. 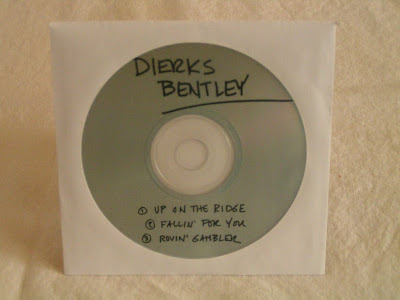 Dierks also said each show will be different and there were some changes. I was hoping for Train Travelin' and Prodigal Son's Prayer but it wasn't to be."

Thanks for sharing, Janet! What a unique 'peak' experience!