DIERKS BENTLEY'S UP ON THE RIDGE PREVIEW LISTENING PARTY 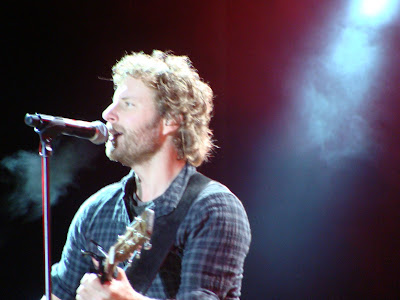 Apparently, a priviliged few were lucky enough to hear a few cuts from Dierks Bentley's upcoming Up on the Ridge Acoustic Album, during a March 30 listening party at Gary Paczosa's studio in Nashville.

CMT.com has the scoop!

Dierks and his producer, Jon Randall Stewart, previewed tracks from Bentley's impending country-bluegrass album, Up on the Ridge, during a Tuesday afternoon (March 30) listening party at engineer Gary Paczosa's studio in Nashville. Although the instrumentation and sensibility of the 12-song album are solidly bluegrass, the project ventures well beyond the traditional sounds of that genre. The title cut, for example, is a rap-flavored, banjo-inflected paean to rural living, which Bentley co-wrote with songwriter-producer Angelo Petraglia, best known for his works with Kings of Leon.

Besides marking a return to the music that influenced Bentley early in his career, the album features guest appearances from such bluegrass luminaries as Del McCoury (one of the artist's regular picking and recording buddies), Alison Krauss, Sam Bush, Sonya Isaacs, the Punch Brothers (mandolinist Chris Thile's current group) and the SteelDrivers' Chris Stapleton.

Stewart has a distinguished bluegrass pedigree, as well, having toured and recorded as the lead guitarist in Emmylou Harris' fabled Nash Ramblers band.

He resurrects "Rovin' Gambler," the old folk song, and creates a new one with the ancient-sounding coalfields lament, "Down in the Mine," a co-write with Stewart.

According to Esquire Magazine, the album is scheduled for release in May. That's a whole 30 days from now!

What I wouldn't give to have been a fly up on the ridge, uh, wall of that listening party! Congrats to all the DB fans who will get to see him and the Travelin' McCoury's live on the April-May bluegrass tour! Sadly, nothing is scheduled close to me. Guess I'll just have to wait for the album!
Posted by DB Congress at 7:54 PM