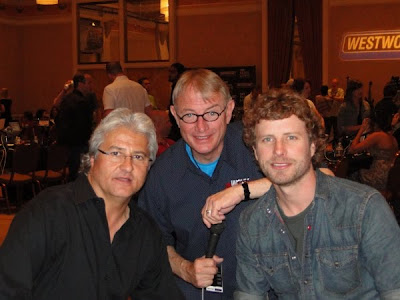 WQYK Morning DJs, Randy and Dave (Tampa, FL) were reliving their Dierks Bentley and Trace Adkins video interviews on the air yesterday, from last week in Vegas before the ACM Awards. Dave was talking about Dierks walking up at the end of Trace's interview and how they both gave DB a hard time about his pants. So my husband called in to comment:

SC: Hey, love you guys but listen if you're gonna be dissin' Dierks, you gotta at least play his new song.

Dave/WQYK: I'm not dissin' Dierks! Did you see the video?

SC: Yeah. He's a good guy; he's a man, not a pretty boy--ever see him play hockey? He could whip Trace Adkins with one finger.

SC: Yeah, we were gonna start a campaign called "a dollar for dierks" so we could buy him a new pair of pants.

While on the phone with Randy and Dave, my husband confessed to them that he was actually of fan of theirs--go figure. And so is the DB Congress. Thanks WQYK for all the Dierks love!

Go to WQYKTV.com to watch the Trace and Dierks interviews: Trace here (with Dierks at the end) and Dierks here.