HE WANTS A CABIN IN THE WOODS...UP ON THE RIDGE 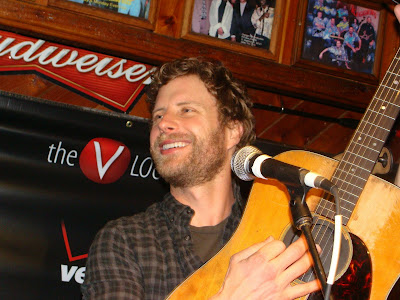 Are you wondering where Dierks Bentley came up with the idea for his new single and CD, Up On The Ridge? Apparently, all last year while on the road touring, he was dreaming of being back home, on his property just outside of Nashville. The country music singer/songwriter owns a piece of land on a ridge. This summer he plans to build a cabin up on that ridge.

Dierks Bentley didn't have to look far for inspiration when coming up with a title for his upcoming album. 'Up on the Ridge' and the title track was inspired by a go-to place on his property. Last year's tour was pretty hard on the singer, who kept dreaming of getting a little time off to be able to prop his feet up on the ridge.

"It was a grueling year to be on the road," Dierks tells The Boot. "Every day I was out there, I was like, 'Man, I really need to be doing something musical.' It was something that was forced upon me just in a musical sense [that] I need to get off the road. I said, 'I need to get up on the ridge, this land I have outside of town. I want to build a cabin and write songs and really do something that's rootsy and bluegrassy. And that's what I dreamed about every day I was out there on that tour."

While Dierks knows what he's going to put on the ridge, it hasn't happened quite yet. "I ordered this pre-fab tent/cabin -- like a pioneer-style cabin -- online and had delivered, and this was what I was going to do [after the tour]," Dierks reveals. "And of course as soon as I got back here, I started writing songs and I haven't had a chance to build it at all. It's sitting in my garage, just waiting. I haven't had any time to do it at all. It will be mid-summer before I actually get to do that."

The area is pretty therapeutic for Dierks when he needs to get away from the stresses of being on the road. "In my mind that's where I go when I want to get [away]," explains the Phoenix, Ariz. native. "It's my happy place."

Dierks has a few days to enjoy his "happy place" before kicking off his Up on the Ridge tour in Portland, Ore., on April 21, while the album is due out later this year.
Posted by DB Congress at 7:43 PM

Email ThisBlogThis!Share to TwitterShare to FacebookShare to Pinterest
Labels: cabin, Dierks Bentley, theboot.com, Up On The Ridge