COUNTRY WEEKLY'S GOT A LOT OF LOVE FOR DIERKS

You may recall Dierks Bentley made the cover of Country Weekly twice in 2009--April 13 and September 21. So far in 2010, no such luck, but CW showed lots of love for DB nonetheless in the last three issues alone:

April 19
Page 11 - Twitter Talk: 'jake says howdy. he is apparently going on some sort of trip...didn't invite me.' -Dierks Bentley, referring to his dog, Jake.

Page 52 - Reviews: The Infamous Stringdusters, Things That Fly CD..."the band waxes humorous on '17 Cents,' on which guest Dierks Bentley throws in his own two cents' worth."

Page 56 - Stars Up Close: OK, it's not Dierks, but our very own Alacia Satterfield, DBC rep from Utah is pictured with Miranda Lambert in the smoking gun pose!

Page 58 - Flashback: El Paso/Marty Robbins; OK, again, doesn't mention Dierks, but hey, Bentley's radio show, The Thread was all about this Grammy winner on 4/19, so it's relevant!

April 26
Page 7: Editor's Letter-Lisa Konicki urges readers to go behind the scenes with Dierks to look at what it takes to make a radio show happen.

Page 12: The Hot List-Dierks was scheduled to perform at...Dow Live Earth Run for Water on April 18...(but had to cancel to perform on the ACM Awards show).

Page 38-40: Golden Threads-Dierks Bentley ties together his love of bluegrass, country and folk music with a radio show, a tour and a new album; major DB love here! Learned at least on thing I didn't know...that this radio gig is only for a year. Favorite quote:

"A lot of times I'll be on stage at a concert and I'll get off on some tangent and the guys in my band will be like, 'Dude, just sing the song. Stop talking and start singing.' They give me grief." 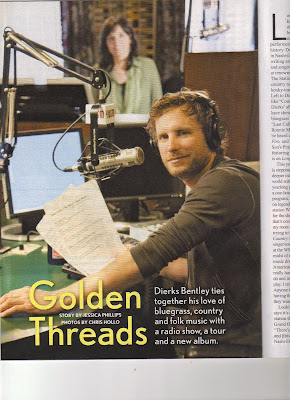 Be sure to pick up this issue and read the article to find out who Dierks is planning to have on his radio show for future episodes.

Page 56: Stars Up Close-Delighted by Dierks Laura Rayer, Dexter MI, is a member of the fan club and shares her Battle Creek, Michigan Meet and Greet picture with Dierks.

May 3
Page 9: Dierks Previews Ridge Album- Read what he saw out the window when he was recording his bluegrass version of U2's "Pride."

Page 52: What I'm Listening To-Check out the diverse lists of artists our DB Congress president likes!

Page 57: countryweekly.com ad-OK not a story, but DB's pic is at the top!

So there you have it, folks! Lots of DB love from Country Weekly! Now, it's our turn to show the love to CW. Email them with lots of thank you from DB Congress love! Oh, and don't forget, subscription service is back!
Posted by DB Congress at 10:51 AM