DB Congress Rep, Carrie, from North Carolina lives in Charlotte and was happy to get to see Dierk Bentley perform in her home town on Friday, June 5. But the real excitement was 166 miles away the next night, to actually meet the man through her DB Fan Club Meet & Greet in Raleigh, NC.

"My husband and I got to the venue, and as we were pulling into the parking lot, my husband said, "is that Dierks behind us?" I turned around, and sure enough, there he was in his Jeep, getting ready to go hang out with the tailgaters! We stopped by the camp site for a bit while he was hanging out, but then decided it would be better to go get my M&G pass and figure out where to go.

As I was walking away from the will-call window, a girl noticed my DB Congress tee, so we started chatting. Turns out it was Keesh, and she had Angie with her. Misty and Ashley weren't far behind [all DBC reps]! It was fun getting to meet fellow DB Congress members.

Then it was time to meet Dierks! We lined up and waited for Dierks to come in. When he did, he went down the line and shook hands with everybody, then the meeting and greeting began.

I read in Country Weekly (and then confirmed it in a couple other articles) that Dierks went to Ingleside Middle School in Phoenix -- which is also where I went to school, though sadly I'm a few years younger than him, so we weren't there at the same time. But I figured it would be fun to have him sign my yearbook, since it's probably not every day that he meets a fan in NC that went to the same school. 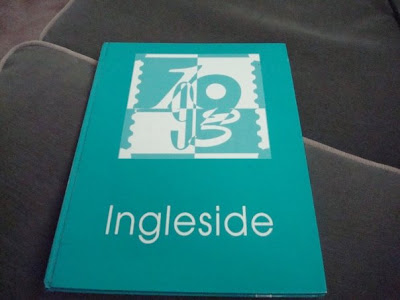 When it was my turn, Dierks held his arms out for a hug and said something like, "look at you, representing the Congress!" He told me to turn around so he could read the back, which he read out loud, and then we got our picture taken. 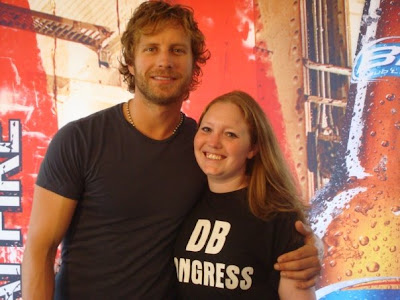 So then I asked him, "you went to Ingleside in Phoenix, right?" and he was like, "yeah!" I held out my yearbook and said "so will you sign my yearbook?" He was like, "no way! So you're from Phoenix!?" I explained that I was a few years behind him, so he wasn't actually in it, but he got a huge kick out of it. He flipped through it for a few minutes, and showed it to the guy who was filming the M&G and was like, "she went to my middle school!" Haha. He asked where he could sign it, and I told him wherever he liked, so he confirmed that he could sign where "all my friends" did. 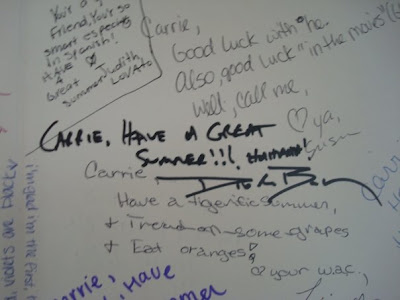 As you can see in the pic, he told me to "have a great summer! hahahaha!" in true yearbook form. While he was signing it, I told him the Charlotte show was great the night before, and that I really enjoyed the bluegrass version of Come a Little Closer, and in fact, it had actually made my husband like the song. Dierks said bluegrass was either love it or hate it, and said they were just doing the normal version that night, so hopefully my husband wouldn't be too disappointed. Then he squeezed my arm, and said "thanks sweetie!" and I went on my way.

I assumed my time with Dierks was, at that point, done, but then as we were gathering around for our mini q&a session, he surprised me by saying, "Carrie, when did you move to North Carolina?" I told him a little over 5 years ago, and then he asked if I was living in Charlotte, which I confirmed. Then he asked how I liked it, and I said I like it a lot (which I do!) but that I did miss Phoenix (which I do, haha).

During Q&A, we asked about the family, and Evie, and the dogs, of course (who were in the bus). Somebody asked how the tour was going, and he said it had just started, so there weren't any pranks to speak of. He asked if anybody had been to the show the night before, and Ash and I were the only two, but we assured him it was a great, high energy show as always. :) As we were taking the fan club group picture, Dierks mentioned we were the only people he really wanted to hang out with, but alas, we had to make time for the radio winners. He went through to say bye to each of us individually, and gave me a hug and said, "Carrie, thanks for bringing your yearbook, that was a lot of fun."

Needless to say, I was on cloud 9 as we left the M&G! I will never get over how down-to-earth and friendly Dierks is. He is so good at putting us at ease, and he has such a great memory. He makes each fan feel like they're the only person he's talked to that day, which is so incredibly special.

My seats were in the first row of the second section back, a clear shot off the right-side catwalk. Apparently the section I was in wasn't very Dierks-happy, because I was the only person standing for a while, which was fine for me, since as soon as Dierks came to that side during Sideways, I got pointed at, the fist pump, and a wave! Later in the show, during What Was I Thinkin', Rod tipped his hat in my direction as well.

Those guys really know how to make a girl feel special, but I'm convinced that DB Congress shirt was one of the best investments I've ever made!

His show was great, though a little shorter than the show in Charlotte. In Charlotte he played Wanna Make You Close Your Eyes, which he did not play in Raleigh. My only guess is that Raleigh's venue has an earlier "curfew" because the show was over at 11, while the Charlotte show went to about 11:30. But both nights he was high energy and connecting with the crowd really well.

I'm actually somewhat appreciative of the fact that Dierks "stepped back" to open for Brad -- I love watching "new" people connect with Dierks and react to how awesome his show is. And I know quite a few tailgaters will have a story to tell as well. All in all, I had an absolutely great weekend. I got to meet some great Congress members, and I have an awesome Dierks story that I will remember forever!"
Posted by DB Congress at 7:10 PM