THE REST OF JORDAN'S STORY

When Dierks Bentley debuted the tribute, "Hey Jordan" at Last Call Ball, I quickly thought to switch to video. I posted the result on YouTube as well as here on DBC.com. The Phoenix New Times found it on YouTube and placed it in their blog. Here's the rest of the story: 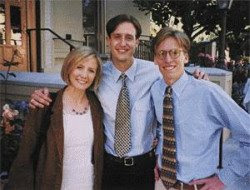 Phoenix-bred country star Dierks Bentley's newest song is a melancholy tribute to Phoenix resident Jordan Sterling, who died earlier this year at 34, after a life-long battle with cystic fibrosis. Jordan and his sister, Brooke, were profiled by Megan Irwin in our 2006 story, "Borrowed Time," which chronicled the siblings' very different battles against cystic fibrosis. (Brooke is a yoga instructor who uses alternative and natural medicine; Jordan took a more traditional approach.)
According to this blog by his stepmother, Jordan Sterling's health began to seriously decline last year, after a doctor accidentally pierced one of his arteries.


Many of his friends were childhood pals. Like Dierks. During all the years that Jordan struggled with his health, all those scary pre-transplant years, Dierks worked at his music. Dierks became a celebrity, a country western idol. He could have ignored Jordan, but he was always a true, attentive friend. He was Jordan’s friend when Jordan was healthy, and he was Jordan’s friend when Jordan’s was sick.

He died in Phoenix at St. Joseph's Hospital on January 29. Bentley was a close friend. The Arizona native has been making waves in Nashville for the past few years -- he's sold more than five million copies of his first three studio albums, and he's also been the recipient of a CMA Horizon Award. He was also, at one time, the youngest person inducted to the Grand Ole Opry. Bentley's song for Sterling, "Hey Jordan," is a rather upbeat acoustic guitar song, but contains lines rife with sadness, like "I miss you, and I want you back/Don't know how I'm gonna live without that laugh" and "Hey Jordan, how is heaven? I bet they're glad to have you home."Hear Bentley introduce and perform "Hey Jordan" by playing the video.
Posted by DB Congress at 7:15 AM