On this week's GACTV Top 20 Countdown, Dierks was featured as one of the CMA Fest interview snippets. Here's what he had to say about his fan club party:

"This whole deal as a singer it's kind of like thanksgiving, where you count your blessings, think of all the things you're thankful for and get a chance to see all your fans personally and thank them for this great life you get to live and live out your dreams. So that's what CMA Fest is...the fan club party is like sitting around the family table, you know, because those faces I've seen them now for 5, 6 years and we've grown up together, gone through a lot of shows together, and a lot of life experiences together. So the fan club party is really special. It's a 2-way street and I get a lot out of it--hopefully as much as they get out of it, too. It's a big deal."

Several fan clubbers (and DB Congress reps) wanted to share their LCBV M&G photos and stories, so here they are: 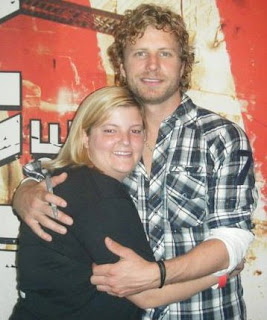 I was freaking out the whole time that pic was being taken! lol I wished it could have lasted longer! I was still freaking out even after we got outside.
I looked at Mikhael (husband) and my hands were shaking and my eyes were even watering a little bit. All he said was 'you don't do that when you see me!' I think he got a little jealous.
This was her first photo with Dierks!
~Kendra, Louisiana 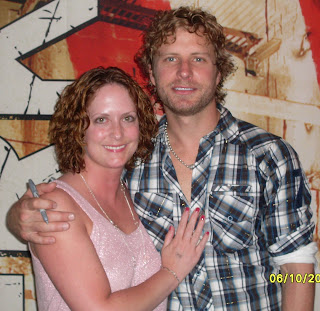 During my M&G with Dierks, when it was my turn I had told Dierks I do not have anything for him to sign (I am not big on signatures anyways) and told him I have too many things signed and would just like a picture this time. We took the picture and he tried to make conversation by saying he liked my shirt and thought it was really cute. I said thanks and walked out so he could move on to the next fan.
As I was walking away Dierks said, "WAIT, wait, wait!" I turned around and he said "Is that an Urban tattoo I see?" Busted! I just smiled and said "you don't see nothing"!
So you know, I am not an Urban fan but do like the Monkey figure, so I had it done in my own way...No worries, Dierks is still my #1!
~Anne, Minnesota 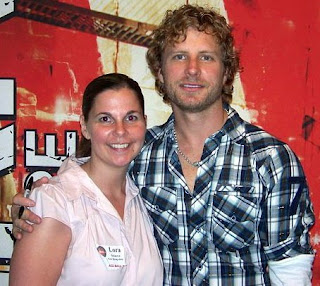 It was so nice meeting everyone at the fan club party.
It was a fantastic experience and fun meeting so many people.
Thanks so much! Dierks is awesome! 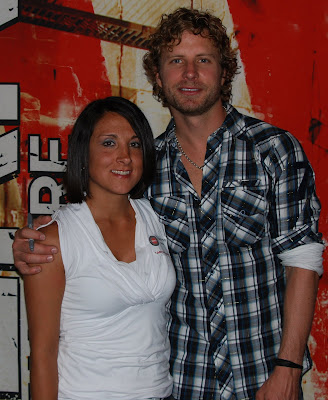 Theresa (left) is our 501st DBC rep! She and her sister Joelle (below) are from New York. 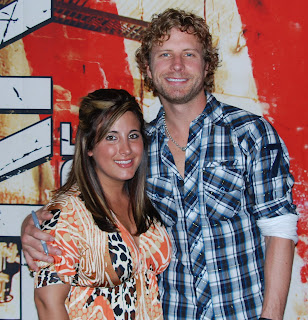 "We had a great time meeting Dierks and can't wait to meet him again. Thanks!" 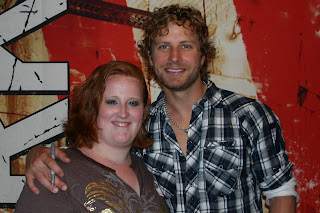