Stephanie (MO), Beth (WA) and Tayla (PA), DB Congress reps arrived in Nashville Tuesday, June 9, ready for a fun week of fan club parties and CMA Music Festivities. After a bite of dinner, they headed for the car with every intention of going downtown just to walk around lower Broadway.

"Well those plans quickly changed," writes Steph in her Myspace blog, "when I get a text from Tracie (DBC Rep from Michigan) telling me to check Dierks’ twitter…right now! So we pull it up and bam, there she is in all her glory standing next to Dierks at some bar watching the hockey game. Nice!"

http://twitpic.com/70nof - is hanging out with db congress member tracie...we are watching the stanley cup!9:02 PM Jun 9th from TwitPic 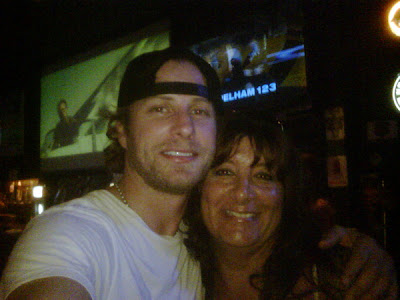 "Tayla really did want to watch the rest of the game," Steph continues, "so we headed down to Sam’s and figured hey, if we get to see Dierks too, cool beans! The bar was fairly tiny and we never expected him to be sitting at the front table when we walked through the door. He saw us trying to walk around him and just stuck his arm out and gave us all hugs and kisses on the cheek.

He asked how we found him and said we saw Tracie on his Twitter. This launched his hilarious “I thought Twitter was just about John Mayer talking about eating weird goat cheese” comment as to why he never used it before.

Once the game was over, we all stood around for a bit talking and hanging out. Tracie decided we needed another picture together so we get ready when everyone starts laughing. Out of the corner of my eye I see Dierks has joined in on the fun…hehe. Definitely made for one of my favorite pictures ever!" 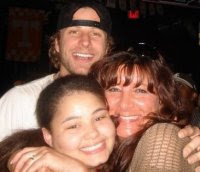 "He was super cool...super nice and seriously, the one guy he was with was HOT!" says Tracie. "He just snuck up from behind and got in the pic with us. He had been sitting behind us while the game was on and we were being loud. He can be sneaky around me ANYTIME! Wup!"