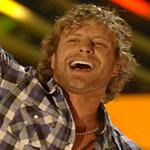 Forbes.com posted The Next Breakout Stars featuring ten personalities who click with audiences and have the potential to become household names. Our very own DB Congress Prez, Dierks Bentley, made the list--the only musician to do so!

Rounding out the list is country music star Dierks Bentley, a hit with those fans who have discovered him but not yet a breakout act--witness his 14% public awareness ratings. Philpott suggests getting him on a national tour with Kenny Chesney or another well-known artist who has successfully crossed over to the mainstream pop world.

10. Dierks Bentley Country Musician - Like a lot: 43%; Awareness: 14%. The winner of the Academy of Country Music's "Top New Artist" in 2004, Bentley has yet to hit mainstream superstar status, though the fans who have discovered him can't get enough.
Posted by DB Congress at 8:00 PM

Email ThisBlogThis!Share to TwitterShare to FacebookShare to Pinterest
Labels: Dierks Bentley, Forbes, The Next Breakout Stars