Finally after a year and a half of submitting through the fan club, and patiently waiting, my name had been chosen for a Meet & Greet with Dierks in CT on June 13th 2009. I was absolutely ecstatic. I had met Dierks very quickly on two occasions prior, but never had the experience of being around him with the 19 other die hard DB board members. Luckily, I also had a close friend that was also chosen from the lottery of fan-clubbers, Mandy, who was onstage with me at the Jimmy Fallon show to support Dierks. 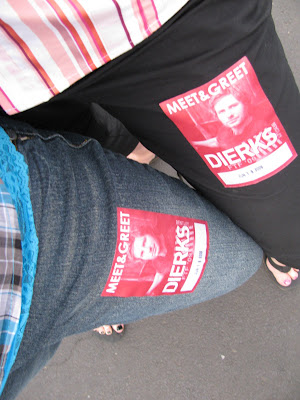 Having a friend to share the experience was really exciting for me, and also a distraction from being in the same proximity as my favorite country artist of all time and not freaking out. We tailgated in the parking lot along with thousands of people on that warm early summer night. Our time to meet at the gate was 7:30, and we were brought to a back lot with a tent set up and the new Feel that Fire backdrop for us to take pics with the "Dude"--it was very intimate and surreal. Out walks Dierks from the buses in a blue plaid shirt & jeans, blackberry in hand, Twittering as he walked under the tent toward all of us. Everyone claps and he says "Hey Guys" with that perfect white smile. He looked so great, very well rested and curlier than ever with the slight touch of humidity in the air.

So from then on I was glad to be feeling a little bit of my tailgating cocktail or else the butterflies would have kicked in BIG TIME. I was up next in line after several people, handing the new tour manager my camera, when I hear Dierks say to me "Hey nice shirt, wanna trade?" We both had on blue plaid and he noticed instantly. I giggle, not able to even say anything (Plaid Shirt? Check. Butterflies in stomach? Check!) He asks me where the picture I had in my hand is from and I tell him "The big CD release in Philadelphia in Feb. but there were about 500 other people there so I don't expect you to remember me." He smiles, and puts his arm around me for a picture (*sigh*). 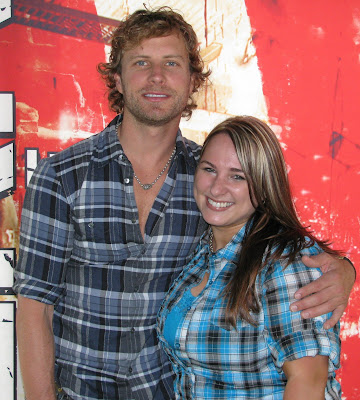 Afterwards, my brain finally starts to work and I tell him we were onstage with him for the Jimmy Fallon show while pointing to Mandy in line. He waves her over as he's telling me that was one of the most fun talk shows he's done. I move out of the way for them to take a picture together and then it was the three of us just standing around chatting. He could tell by this time we were both getting a little silly and making him laugh and says, "Were you girls having a few beers before the show?" I say "No...Vodka." We all giggle. Here's Mandy's M&G pic (I spy a DB Bracelet!): 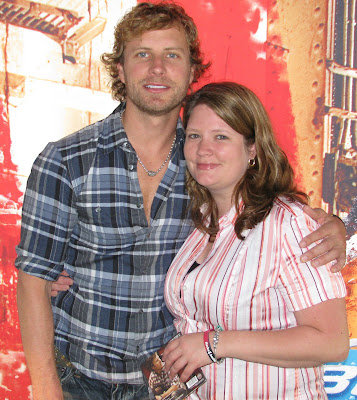 Dierks told us that he took the jeep out earlier in the day and cruised the parking lots to hang out with the tailgaters for a while and he was happy everyone was having a good time. I found out later he had a beer with a group of my hometown buddies too. They were totally psyched when his jeep came rolling 'round.

The Q&A: Everyone's first question was, "How's Evie?" and he says, "Good, Good" with that beaming daddy grin. I raise my hand even though I'm smack dab in front of him, and ask him the only question I really could think of. "Whats your favorite bar--where should I go to in Nashville for my 30th birthday in Oct., I'm coming down to Miles & Music?" "Oh you are?" Dierks says, "That's great--I don't have a line up yet for Miles & Music. I really gotta get going on that...go to The Station Inn." He starts to tell me another place to go, but at the same time someone asks me jokingly to ask for his home address. Crazy fans.

I asked if I could get a few pics of him smiling for my camera, so I take the first one and he looks really great in it--perfect smile all for me, great tan from the Aussie beaches, and perfect DB curls! 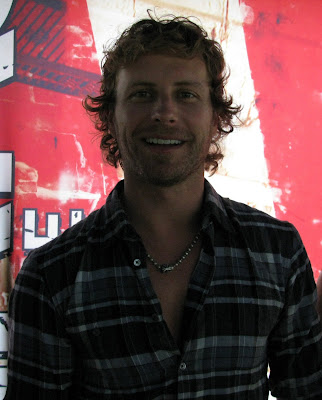 The second picture's my favorite though, he's giving me this Sideways glance and smile that just makes my heart melt everytime I've looked at it since. You can see it in his eyes he thought I was silly or funny...in a good way, of course. I couldn't get my flash to work, but in a way that added to the intimacy of the pictures under the tent. They capture Dierks without the bright lights and the big stage--just the man hanging with his crew of far away friends from CT. 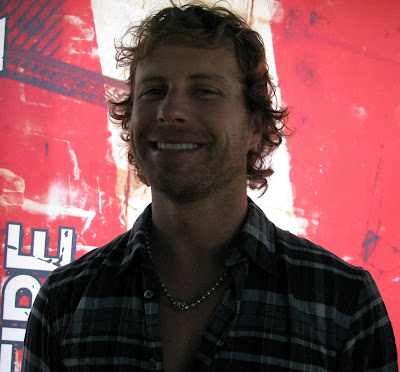 By the end of the Meet & Greet I really just felt like I was talking to another one of my hometown buddies. We even chatted about how we were going to bring plaid back & I almost broke out into the robot for him while singing "I'm bringing Plaid back..." to the tune of Justin Timberlake's Sexy Back.

That's what's so great about Dierks--he has that way of making you feel important--not intimidated. It felt like I was just kickin' back hangin' out with one of my hometown buddies.

Hope to one day have a beer with Dierks, or Vodka, whatever he prefers!

We leave and I ask for a hug & without hesitation he leans in and I wrap my arms around him. Love you Dierks! (*sigh...what a great HUGGER!*). So my "first time" Meet & Greet was quick but unforgettable. I wish it would have lasted longer.

During Dierks' performance the Security guard let us up to the catwalk. He was singing, "What Was I Thinking," as he ran up and down the stages getting the crowd to definitely feel that fire!

He approaches the very end of our catwalk, reaches his hand out to the adoring girls around him and looks up when he spots my shirt. I got the BEST stage smile I could have EVER asked for and he reaches even further through all of the hands to grab mine. He holds it for a good
15 seconds and I felt like the most important fan in the world. I felt this firm appreciative grip from him. It was like he was giving me a little extra love 'cause he knew I was a dedicated DB Congress member.

Dierks, I will always be dedicated, because I know how dedicated you are to your fans and the DB Congress! And, I'll always wear plaid because it makes it really easy to be spotted out in the crowd!